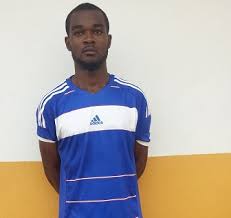 Abia Warriors Football Club of Umuahia midfielder, Kalu Nweke will be out of action for at least two weeks after he sprained his ankle during his club’s 0-1 loss to Katsina United at the Karkanda Stadium
last Sunday.
Nweke was about to pull the trigger after he had his full sight on goal before he was brutally hacked down inside the area by a Katsina defender but the centre referee looked the other way as Abia Warriors bench pleaded for a spot kick.
The midfielder was then stretchered off in pains after being attended to by the medical staff and substituted.
Abia Warriors medical team led by Dr. Enyinnaya Anozie after proper examination identified the injury as ankle sprain, revealing  that he would be out of action for at least two weeks.
In his reaction, Abia Warriors Chief Coach, Abdullahi Usman Biffo described Kalu’s injury as unfortunate adding that as an important member of the team, he would be missed and wished him quick recovery.