The last two African players in the 2017 ITTF World Championships were on Thursday June 1 shown the exit by their Hong Kong and Denmark counterparts in the men’s singles.

It was Egypt’s Omar Assar that first tasted defeat in the second round of the men’s singles despite putting up a strong fight against the Asian star.

Despite the pedigree of his opponent ranked number seven in the world, Omar Assar was cheered by the German fans for his beautiful display against Hong Kong’s Chun Ting Wong.

With a lot of confidence, Omar Assar gave the fans something to cheer but his opponent had other tricks for the Egyptian and his hanky-panky worked out for the Omar Assar to fall 4-2 to the Asian star.

Unlike Assar who claimed two games from his opponent, Aruna Quadri was not as lucky in this edition of the ITTF World Championships as he was not in his usual elemen. This offered his Danish opponent Jonathan Groth the opportunity to rattled him..

However, Assar listed some gains from competing in Germany. Assar spoke after losing in the round of 16 of mixed doubles.

“We wanted to at least make it to the medal zone having won several titles in Africa. We trained well and having been working together as teammates and we wanted to show that Africa can compete with the world’s best. Unfortunately we lost to the Spaniards but we are satisfied with our performance in the mixed doubles event. Generally, African players have shown that they are not pushovers with Aruna Quadri and myself now playing more with the best players in Europe and we are still young. We hope we can get up there and compete more with the best at this stage of the sport.” 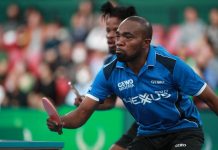 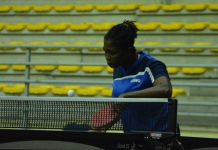