Mosconi Cup winners Jayson Shaw, Joshua Filler, Kelly Fisher and Allison Fisher are the big names representing Britain that has been confirmed for this year’s World Cup of Pool organized by Matchroom Multi sport. The events is scheduled for May 9-14, 2021.

MVP Shaw will be joined for a second time on Great Britain Team A by Chris Melling, a Mosconi Cup MVP himself in 2012.

Women’s World 9-ball champion Kelly Fisher and Hall of Famer Allison Fisher will be out to do some “damage” after being announced as representatives for Great Britain as Team B.

As host nation, Britain will have two teams at the event. The ‘B’ Team has been confirmed to consist of Kelly Fisher and Allison Fisher pairing up for an all-women line-up for the highly-anticipated tournament.

“I am really looking forward to the World Cup of Pool,” said Kelly Fisher. “It will be me and Allison together, playing doubles against the guys, it will be great fun. We will be out there to do some damage, it will be super exciting for the fans, and for us too.”

Representing Germany, Joshua Filler will team up with debutant Christoph Reintjes. Reintjes is a former EuroTour silver medallist and joins Filler, the 2018 world champion and reigning US Open champion as Germany look to lift the trophy 10 years on from their only previous World Cup success.

Meanwhile, the Snooker and Pool Players Alliance is eagerly awaiting the arrival of Joy Billiards Q3+ and Bing Pool equipment from China. The equipment will used for the 5 Joy Billiard Chinese 8 Ball Pool Tournaments holding in the 3rd and 4th quarters of 2021.

The Alliance is implement a robust Cue Sports development program consisting of events that will see Nigeria players feature in top elite event of all the Cue Sports; Snooker, Pool and Billiards 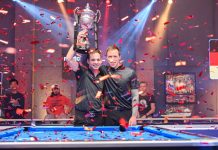