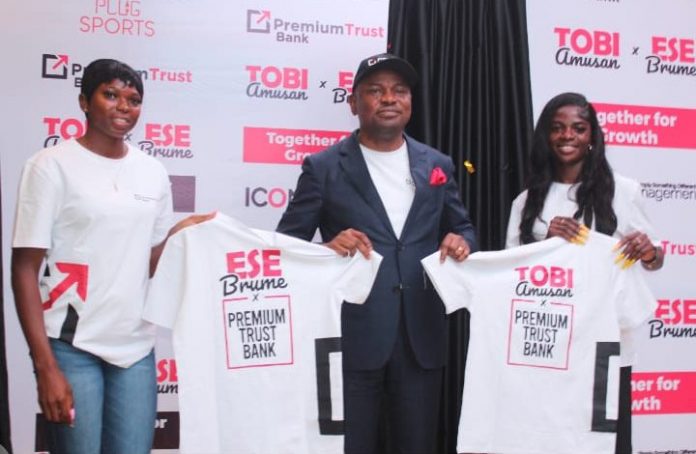 Premium Trust Bank endorsement of World Athletics record holder in 110 meters hurdles, Oluwatobiloba Amusan and African and Commonwealth Games Champion, Ese Brume, has prompted the world champion to applaude having the trust in them to give them multi million naira sponsorship deal that would further improve them as professional athletes.

Amusan and Brume, noted that, the Managing Director of Premium Trust Bank, Mr. Emmanuel Efe Emefienim, met them at the Olympics with offer as brand ambassadors when nobody gave them the slightest chance to attain the height they are today in the world.

Tobi Amusan in 2022 won the World Championships and created a new World Record in the Women 100m hurdles. This was the first for any Nigerian in the history of sports, while Brume has been very consistent since winning a bronze medal at the last Olympic Games in Tokyo before adding medals at the World Indoors Championships and the Commonwealth Games.

Speaking at the unveiling, the Minister of Youth and Sports Development, Sunday Dare, said the two athletes are symbol of the future of the country’s athletes.

He also called on corporate organisations and individuals not to wait until the athletes are crowned champions before giving them worthy support to develop them. The corporate world should invest in the athletes and they won’t regret this.

“These athletes never relented after getting the desired supports as they have been thriving in their performances,” the minister said.

He added: “Even at the big stage, the athletes knew they had it in them and they never stopped and when the time came, they showed up big time, they showed up for themselves first having done the sacrifices, gone through the discipline, because if you have talents and you don’t add discipline to it, you cannot excel.

“I want to thank Tobi for doing that job in Oregon, USA, where she broke and set two records in one night. I say thank you to Tobiloba Amusan on behalf of Nigeria, and I want to say, we are grateful.

“Brume on her own part, hard a great time at the Olympics in Tokyo, when Tobi finished fourth in her race, and the only person that could comfort her is Ese, not even her coach could do that, I am happy seeing the two of them here, happy to see what they have attained so far.

“Ese came third at the Olympics, but to us, it was a Golden Bronze, thank you because when you came to the Commonwealth Games, you did it again.”

Also speaking at the unveiling, the Managing Director /Chief Executive Officer, Premium Trust Bank, Emmanuel Efe Emefienim, said the major goal of the bank is to support growth hence the maxim ‘Together for Growth’.

According to Emefienim, Premium Trust Bank, decided to associate with the two renowned athletes to drive towards enabling growth they put into their story.

He added: “This should serve as motivation to other athletes who dare to be different and win no matter their background and obstacles they experienced as they continue in their journey towards a victorious destination.

“The story of the two athletes is similar to that of the bank. I can say today that, I am happy to see where Premium Trust Bank is today and we hope the partnerships brings great impact to the athletes, the sports industry and the country.”

The two athletes appreciated the bank for counting them worthy to be the Brand Ambassadors and promised to maintain the standard expected of them.