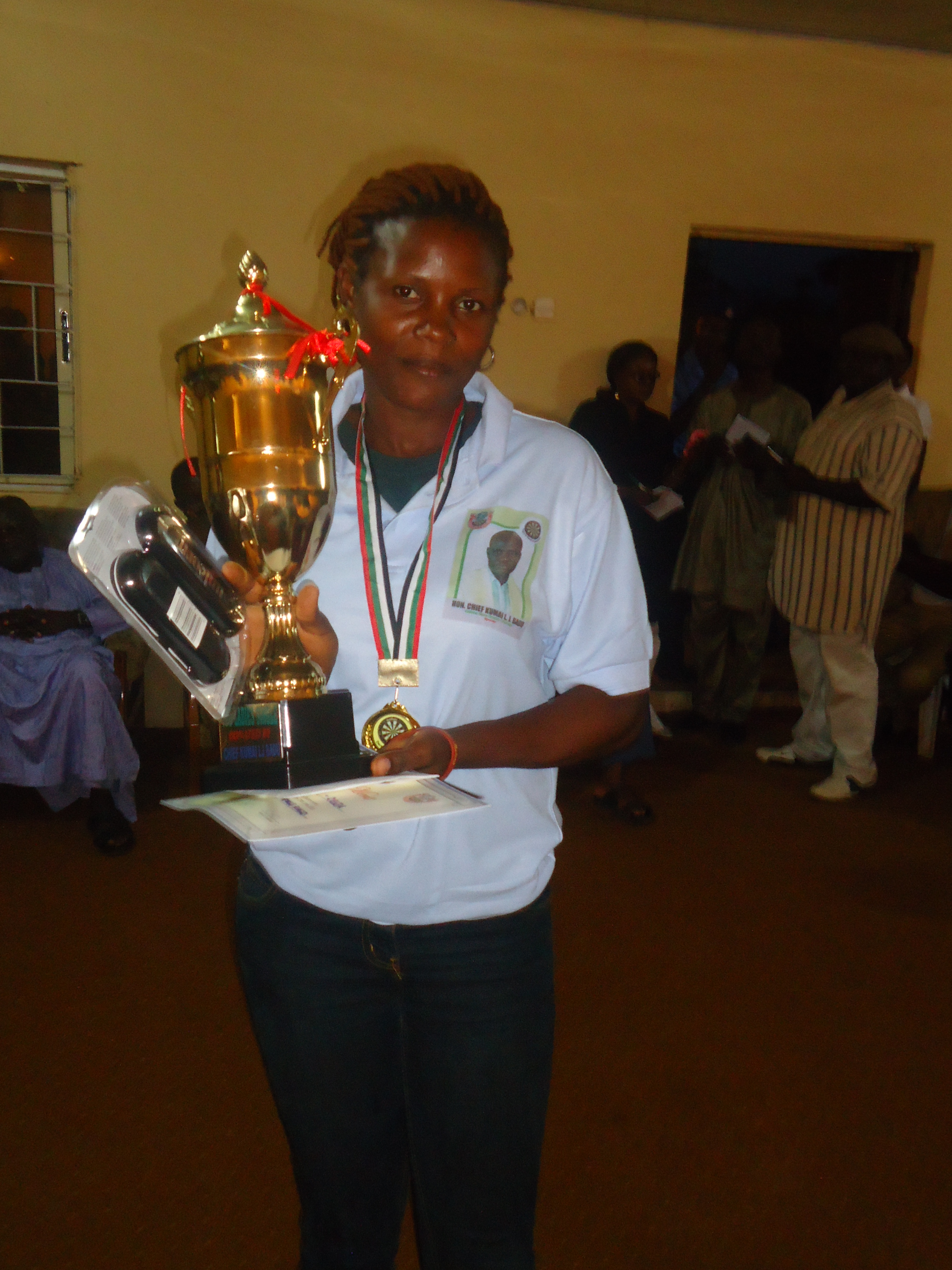 Darts Connoisseurs were in for an exhibition of beautiful game of darts at the first edition of the June Open National Singles Championship hosted by the Kafanchan Club in Kaduna State.

The championship, which kicked off on Wednesday, 26th June, 2013 was organized by the Nigeria Darts Association (NDA) and was supervised by the Darts Federation of Nigeria (DFN).

Sixty Eight players from 23 different states participated in the championships. Topping the list of winners at the championship was Delta State born Becky Omoro with her outstanding performance in TDB becoming the first female winner for Female Champion Title in Triple, Double and Bulls (TDB)( i.e Micky Mouse) version of Darts at the Darts championship.

Darts which came into the Nigeria Sports scene was first played at the National Sports Festival in 2006 in Abeokuta, Ogun State. The Kafanchan Darts championship also gave darts players in the country the opportunity to showcase their skills since the game was not included in the last sports festival.

Darts can be played in different categories inckuding the 301, 501, 701, 1001 and the TDB. But at the Kafanchan game, the 501 being the world standard for competitive Darts was adopted.

The championship, according to the Delta State Darts coach, Mathew Toju Tuoyo, is an eye opener because a lot of things were put in place to make the championship more competitive compared  to other championships organized in the past.

In an interview with Tokunbo Ademola, Omoroh, a staff of the Delta State Sports Commission who came into the game early last year said:

“I just started playing Darts last year and this is my third outing with the Delta State team. I haven’t played in the national sports festival before but I am so happy that I won in Kafanchan. When I saw people playing Darts in my state, I picked interest in the game and I started training, I can play 501 as well but I’m very happy to have emerged as the champion in TDB”.

Noting that darts is relatively new in the country, Omoroh felt that some things needed to be put in place so that the game can become popular and also developed in Nigeria. Accordingly, she stated that:

“There must be improvement in every area, that is, in coaching, hosting of tournaments, training and also our coaches have to be upgraded and more facilities should be provided. It’s not that we don’t have facilities; we have but we need more because the way the game is going, more people are picking interest in the game but the thing is when you go for training, there’s not enough facilities on ground”. On her future plans, she said:

“Well, I’m working towards it, but I’m still seeking assistance from any sponsor that can help. One of the people I have approached is Mr. Joachim Idada. I have also gone online to check for international competitions and I’ve tried to see how I can sponsor myself, but the money involved is enormous.”

Omoroh’s coach, Mr. Mathew Toju Tuoyo, who started his Darts Career at the Ibadan Recreation club and who is also the head coach of the Delta State Darts team noted Omoroh’s feat at the Kafanchan tourney reflected Delta State’s dominance in Darts in Nigeria:

When asked about the challenges involved in the game here in Nigeria, Tuoyo stated that:

“There are some shortcomings we are currently faced with-we don’t have qualified officials for the game, like the referees, but in Darts we call them “chalkers”. We should also have a training place for the athletes, like those going for coaching courses, but for now in the National Institute of Sports (NIS), Darts is not one of the courses they study there”.

Coach Tuoyo also stated that “Publicity is very important, because the game we had in Kafanchan, I don’t think a lot of people were aware. Let the state governments and the sports commission take the game to the grassroots, they should take it to the schools as well, and also have a darts club in every schools”.

Asked if a separate professional body should be established in Nigeria since there are moves to professionalize darts, Coach Tuoyo stated that, “Darts is a new game so we are trying to bring it up in Nigeria. Like the Unicorn Representative, Mr. Joachim Idada has told, South Africa is the only country where darts is a recognized as a professional sport in Africa and the game of Darts is also a professional sport across the globe. And with the new board that came in, we’ve registered with the World Darts Federation, so Nigeria should follow suit in the game in Africa as South Africa has done”.

He applauded the organizers of the competition and other people that supported them in the game:

“I want to give credit to the Kafanchan Club and the Nigeria Darts Association (NDA) for the hosting of the first Open National Singles Championship. I will also like to thank the Governor of Delta state – His Excellency Emmanuel Udaghan, the Chairman of Delta State Sports Commission – Amaju Pinnick, Chairman of Delta State Darts Association – Tony Obuh, SouthSouth representatives of Nigeria Darts Federation – Henry Erikowa, Princess Misan Okotibor and other board members, for their support both financially and morally”