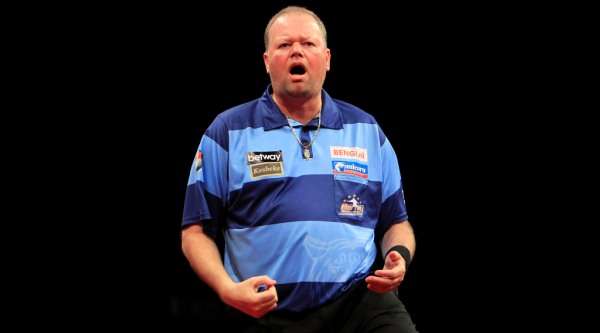 RAYMOND VAN BARNEVELD enjoyed a double triumph over Dave Chisnall and Peter Wright in Sheffield this Thursday in the Premier league Darts, as Michael van Gerwen, Phil Taylor and Gary Anderson also won at the Motorpoint Arena.
The Dutch ace van Barneveld moved up to second place in the Premier League table with his brace of triumphs, twice claiming 7-5 victories to continue his fine season.

He first edged out Chisnall in a thriller, with the World Grand Prix finalist hitting five 180s and a 164 finish only to miss two darts to claim a draw in the game’s final leg, as van Barneveld followed up earlier finishes of 116 and 110 to claim the win.

The five-time World Champion later returned to the stage to defeat Wright by the same scoreline – moving him above the Scot in the Premier League Darts table.

Van Barneveld hit a 136 finish in the game’s second leg, and though Wright posted a superb 11-darter as he shared the opening eight legs, van Barneveld hit tops for a 5-4 lead before a crucial 129 checkout secured him at least a draw.

Wright hit back to send another game into a deciding leg, but van BArneveld hit double eight as he sealed two more points.

Wright left Sheffield without a point from his two matches on the night, having also lost 7-4 to Gary Anderson as the 2011 Premier League champion achieved fifth victory of the season.

Anderson never trailed after taking a 2-0 lead early on, and a showpiece 105 checkout of outer bull and two double tops moved him 6-2 up before he went on to complete the victory.

Reigning champion Michael van Gerwen maintained his position at the top of the table with a high-quality 7-5 win over Robert Thornton, who missed double 12 for a nine-dart finish during the game.

Thornton also led 3-2, but van Gerwen won the next three legs to turn the game in his favour before hitting two 180s in an 11-dart leg after the Scot sent the game into a decider.

Six-time Premier League Darts champion Phil Taylor, meanwhile, moved into the top four for the first time this season as he picked up a 7-4 win over Adrian Lewis.

Lewis held leads of 3-2 and 4-3 but paid the price for missing two darts at doubles to extend that lead, as Taylor finished 102 to level in the eighth leg and took out a sensational 144 checkout in a run of four successive legs to claim the win.

The tournament continues at a sold-out GE Gas & Oil Arena in Aberdeen next week, with van Gerwen taking on both Taylor and Lewis in his double-header.

Lewis also plays Gary Anderson in a repeat of the 2011 Premier League final, while van Barneveld takes on Thornton and Chisnall plays Wright.

Michael van Gerwen v Robert Thornton
1-0 – van Gerwen finishes 96 to win the game’s opening leg.
1-1 – Thornton takes out 95 as he replies to level.
2-1 – van Gerwen opens with a 180 and finishes 41 on double 16 for an 11-darter.
2-2 – Thornton initially misses the bull to finish 81, but returns to land double 19 to level again.
2-3 – Thornton punishes two misses from van Gerwen by landing double two to break.
3-3 – Thornton hits a 180, but van Gerwen breaks back on double eight.
4-3 – Tops sees van Gerwen hit the front.
5-3  – van Gerwen finishes 81 on double 13 to break and move two legs clear.
5-4 – THORNTON MISSES DOUBLE 12 FOR A NINE-DART LEG! The Scot opens with two 180s before hitting treble 20 and treble 19, only to miss double 12 for a perfect leg, and he also misses three more darts to win the leg before punishing one miss at double 12 from the Dutchman by hitting double six.
5-5 – Thornton opens with another 180 and adds a second maximum later in the leg – before both players initially miss doubles in two visits as the Scot returns on double four to level.
6-5 – van Gerwen misses the bull for a 124 finish, but returns to land double 16 as he secures a point.
7-5 – van Gerwen opens with two 180s to set up his own nine-dart chance, but misses the treble 19 on the 141 combination – although he has enough breathing space to return and finish 56 o tops for an 11-darter to secure the win and remain top of the league table.

Phil Taylor v Adrian Lewis
1-0 – Taylor opens the game by posting tops to win the first leg.
1-1 – Lewis hits a 180 and finishes 80 on tops to level.
2-1 – Lewis lands another maximum, but misses the bull for a 121 finish to break as Taylor steps in on double 19.
2-2 – Lewis finishes 79 on double 11 to level again.
2-3 – Lewis posts a 180 to leave 40, and when Taylor misses three darts to win the leg – at double top, ten and five – the youngster steps in on tops to break for the first time.
3-3 – Taylor breaks back, punishing Lewis for two misses at double 18 and two further misses at double nine, allowing Taylor back in on double 16.
3-4 – Lewis takes out 90 on double ten for another break of throw.
4-4 – Taylor hits a 180 to leave 102, and when Lewis misses two darts at double ten for a 77 finish, the 16-time World Champion clinically finishes the combination on double 16 to break and level.
5-4 – Taylor posts a 177, and though he initially misses two darts at double 16, Lewis’ miss at the bull for a 90 finish allows him back to hit the double and move back ahead.
6-4 – Lewis hits a 180, but Taylor breaks with a sensational 144 checkout, as double 12 secures a point.
7-4 – Lewis adds his fifth 180 of the game, but Taylor posts tops to complete the win as he avenges his defeat to Lewis earlier in the season by moving above his Stoke rival in the table and into the top four for the first time this season.