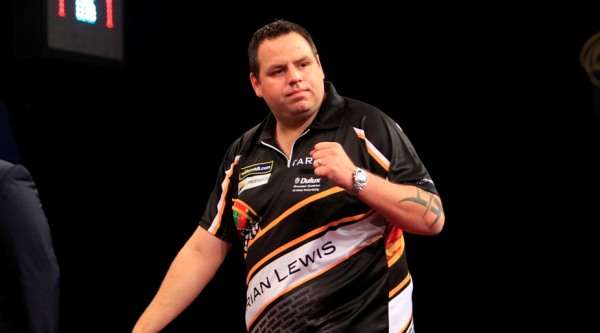 ADRIAN LEWIS and Phil Taylor are through to the William Hill Grand Slam of Darts quarter-finals with thrilling triumphs against Michael van Gerwen and Gary Anderson on Thursday, as James Wade and Kim Huybrechts joined them in the last eight.

Two-time World Champion Lewis hit an amazing 12 maximums and averaged 105.24 in an outstanding performance as he overcame van Gerwen 10-8 in their second round clash of the 2013 William Hill Grand Slam holding in Wolverhampton.

.Lewis set up a nine-dart finish in the game, while van Gerwen enjoyed six perfect darts in one leg and landed six 180s in a high-paced match.

The pair shared the opening six legs, before van Gerwen broke to lead 5-3 with an 11-darter – only for Lewis to respond with an 11-dart finish to kick-start a run of four successive legs as he moved 7-5 up.

Van Gerwen’s replied but was never able to draw level as Lewis’ pounding of the treble 20 continued, with an 11-darter moving him 9-7 up before he held off the Dutchman’s response to seal the victory with a 14-dart leg.

Meanwhile, Taylor, sixteen time world and current world champion was all song and at his clinical best as he held off a fine Gary Anderson performance by repeating the win of the 2011 Wolves Civic final .

The first eight legs was evenly shared at 4-4 before Taylor found another gear, trading 180s with Anderson in the ninth before breaking for the first time in leg ten after the Scotman missed a dart at tops.

Taylor also took the next two legs as he moved 9-4 up, and though Anderson hit back with a 128 checkout, double 12 saw the PDC World Champion progress to the last eight.

It remain a family contest as Belgium’s Kim Huybrechts was the night’s other winner as he took a 10-5 winner over brother Ronny in an emotional evening for the siblings.

Ronny, the elder of the brothers who had won through the group stage unbeaten, hit back to 9-5, but could only watch as the 2012 Players Championship Finals runner-up sealed the win on double ten.