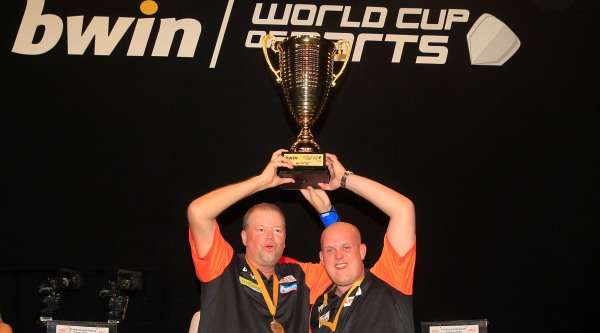 THE Netherlands have won the bwin World Cup of Darts title for a second time, as Michael van Gerwen and Raymond van Barneveld crushed England’s hopes of a third successive victory in the final in Hamburg on Sunday night.
The Dutch pair followed up their 2010 success in the tournament – when van Barneveld partnered Co Stompe to the PDC’s inaugural World Cup pairs win – by taking victory in this year’s £200,000, 32-nation event in style.

Having seen off Italy, Spain and Belgium earlier in the tournament, they were narrow semi-final winners against Northern Ireland on Sunday night before going on to claim the title.

World Champion van Gerwen had been defeated 4-3 by Brendan Dolan in their semi-final Singles contest, only for van Barneveld to whitewash Michael Mansell before the pair teamed up to win the Doubles decider 4-0 with an incredible 117.88 average, the highest ever seen in the tournament.

They took that form into the final as van Gerwen whitewashed Phil Taylor in the opening Singles game with a 103 average before van Barneveld powered past Lewis without dropping a leg.

Van Gerwen then defeated Lewis 4-2 in their Singles clash as he secured a 3-0 victory for the Netherlands in the final – meaning that their nation holds the World Championship, Premier League Darts and bwin World Cup of Darts titles!

“This is a very special moment for us,” said World Champion van Gerwen. “This is a fantastic title because I’ve never won this, and we worked very hard for this.

“I enjoyed every moment of the tournament and to win the final against England is amazing for us and I think we deserved the title because we worked so well as a team.

“We played really well today, especially against Belgium and Ireland in the Doubles games, and then we walked over England in the final with some awesome darts.

“I started off very well against Phil and to win 4-0 and for Raymond to beat Adrian 4-0 was very good for our confidence, and I knew I had to turn up against Adrian. I did that and we won the title, and we’ll enjoy this moment.”

Van Barneveld, who won the Premier League Darts title last month, added:“We’re really happy and this win means a lot to us but also means a lot for darts in Holland. This is a fantastic event and we’re over the moon to win this title.

“There’s no better player in the world to team up with and I enjoyed every single match in this tournament.”

England had seen off Australia 4-0 in their Doubles decider in the semi-finals as they booked a spot in the final, with Taylor having swept aside Simon Whitlock 4-1 before Paul Nicholson overcame Lewis 4-2 to send the tie all the way.

However, their challenge ran out of steam in the final as the Dutch claimed three successive Singles victories to end England’s hopes of claiming a title hat-trick in Hamburg.

“We got to the final and gave ourselves a chance but we were beaten by the better team tonight,” said Taylor.

“We tried everything but Michael’s finishing was brilliant – I don’t think he missed a thing in the final – and Barney played well too. It’s disappointing for us but we’ll be back next year and hopefully we can win back the title.”

Australia, the 2012 finalists, had to settle for a second semi-final defeat as Whitlock and Nicholson’s bid for glory came up short against England.

Northern Irish duo Brendan Dolan and Michael Mansell, meanwhile, reached the last four for the first time in the event’s history after overcoming number three seeds Scotland in the quarter-finals earlier on Sunday.

MATCH INFORMATION
Netherlands v Northern Ireland
Singles 1 – Michael van Gerwen v Brendan Dolan
0-1 – Dolan lands a 180 and finishes double 16 for a 12-darter to win the opening leg.
0-2 – Dolan doubles his advantage by punishing three missed doubles from van Gerwen, who had hit a 180.
1-2 – van Gerwen lands another 180 before hitting double eight to get off the mark.
2-2 – The World Champion takes out 95 on double 16 to level.
2-3 – Dolan misses three doubles, but van Gerwen is unable to land tops to break and the Northern Irish ace returns on double three.
3-3 – van Gerwen opens with a 177 and adds a 180 before hitting double four to force a deciding leg.
3-4 – The World Champion endures his worst leg of the game, and Dolan capitalises to finish double four for victory to put Northern Ireland a point up in the tie.

Singles 2 – Raymond van Barneveld v Michael Mansell
1-0 – van Barneveld takes out 56 on tops to move ahead.
2-0 – The Dutch ace opens the leg with a 180 and lands double 16 to break throw.
3-0 – van Barneveld kicks off another leg with a maximum, and is given a let-off for two misses at tops when Mansell is unable to land the bull for a 93 finish, allowing him back in on tops.
4-0 – van Barneveld finishes 25 on double eight to secure a whitewash win and send the tie into a Doubles decider.

England v Australia
Singles 1 – Phil Taylor v Simon Whitlock
1-0 – Taylor wins the opening leg on double ten.
2-0 – Taylor lands double 16 to move two legs up.
2-1 – Taylor misses the bull and two darts at double eight to allow Whitlock back from a pair of mises of his own to peg double five to hit back.
3-1 – Taylor fires in a 174 score to leave 69 before taking out the combination on double six.
4-1 – Taylor takes out 65 on the bullseye to seal a comfortable win.

Singles 2 – Adrian Lewis v Paul Nicholson
0-1 – Nicholson breaks throw immediately with a fine 14-darter, missing the bull for a 161 finish before returning to take out double eight.
0-2 – Nicholson’s strong start continues with a 15-dart leg as he takes out 62 on double 16.
1-2 – Lewis kick-starts his challenge by finishing a superb 153 checkout.
1-3 – Nicholson initially misses five darts to win the leg before landing double one to move to the brink of victory in the tie.
2-3 – Nicholson misses tops for an 80 finish to win the tie, and Lewis takes out 74 on the bull to keep alive his hopes.
2-4 – Lewis misses two darts at double 16 to take out 82, and Nicholson hits the same bed to seal the win and send the tie into a Doubles decider.

Doubles – Taylor/Lewis v Whitlock/Nicholson
1-0 – England break throw immediately, as Lewis lands tops with his third dart at the bed.
2-0 – Taylor takes out 116 on tops to move England two legs clear.
3-0 – Taylor fires in a 177 score, and when Nicholson misses tops for a 116 finish of his own, Lewis steps in to put England three legs up.
4-0 – Taylor takes out 74 on tops to secure England’s place in the final with a comfortable victory.
Result: England 2-1 Australia

Singles 3 – Michael van Gerwen v Adrian Lewis
1-0 – van Gerwen takes out 74 in two darts to make a confident start.
1-1 – Lewis misses the bull for a 164 finish, but van Gerwen misses two darts at double 16 to allow him back in to finish double 18 for England’s first leg of the final.
2-1 – van Gerwen fires in double 16 to move back ahead.
2-2 – Lewis opens with a 180, and although he initially misses his chance to level, two misses at tops from van Gerwen enable him to return and pin double ten to square the contest.
3-2 – Lewis hits a 174 score to leave 32, but van Gerwen takes out 68 on double two to move the Netherlands a leg away from the title.