After the blind draw conducted by Joachim Idada, convener and President of Snooker and Pool Players Alliance (SPPA) who acted as event referee and Tournament Director, Charles is now set to meet Obaro Obrutse and Kenneth Marizu plays Chijioke Isiolu in the semi finals.

Chijioke Isolu qualiltied despite losing on cumulative score against to most opponent, Chijiode Isiolu against Emeka 1 -3, against Charles Chijide 1 -3 and drawing against Kenneth Marizu 2 – 2.

The game between Obaro Obrutse and Emeka Chijide was annulled as a 0 – 0 as both players were walked over by match referee Idada Joachim because of a late show after the 15minutes game commencement time margin rule of the SPPA. Therefore both players lost the full 4 points of their match.

Nicon Town Pool with a membership of more than 60 players is an affiliate of the Snooker and Pool Players Alliance. The club has installed the Cue Sports Management and Players Ranking System with Agbezin Charles winner of the Nicon Town Top4 Challenge as the highest ranked player with 1042.50 points 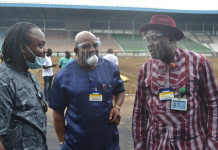 Rivers United Will Not Accept Injustice, No Deal With NFF – Iyaye