Mrs Maduabuchi-David Martha Ijeoma, principal of Chrisland Schools Idimu  believes that there is a connection between Sports and Education. she said this as the Guest of the week on kJYsports, on African Sport Entertainment and News Network, asenntv. She said

“Chrisland is about the development of the total Child.  This involves sports, education and moral uprightness”.

She maintains that a healthy child is one who is agile and disciplined.  Sports inculcates disciplined exercise which stimulates the body, as reading exercises the brain.  Body and brain work together to make a well rounded child.

Mrs Maduabuchi-David Martha Ijeoma, principal, Chrisland College  said at Chrisland, “they study hard and play hard” and that is why they have academic and sporting facilities to make this happen.

She said this has given graduands of the school a competitive edge when vying for admission into higher institutions locally and internationally as their students have developed sporting skills in addition to their academic achievement.

When asked what they do differently from other schools in the area of sports, she said in addition to the Health & Physical Education teacher, they have external coaches in volley ball, athletics and other sports.  In addition, they mentorship programs teaching different skills and sporting academy where they partner with Nigerian sports legends like Peter Rufai a.k.a. Dodomayana and Fanilat Ogunkoya amongst others who mentor the children.

Chrisland has represented Lagos state in many  tournaments and won academic and sporting laurels.  Chrisland is one of the participating schools in the Lagos @ 50 celebrations and got to the semi-finals in scrabble and debate.

In response to a question about how girls fared in sports in relation to their male counterparts, she said

“There is nothing to suggest that one gender does better than the other once they are given equal opportunity and training.  They are zealous, competitive and excel in whatever their passion is”.

She appealed to corporate bodies to invest in school sports in spite of the Nigeria’s current economic situation as she is confident that the recession is transient and they will see the return on investments sooner than later.  For sports to be impactful all stakeholders must play its part, children, parents, institutions, corporate bodies and the government! 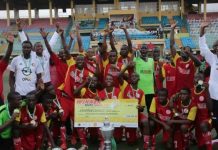 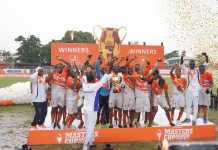 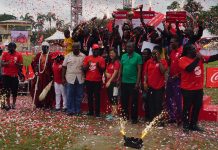