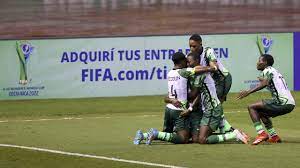 Nigeria tops the Group C in the 2022 FIFA U-20 Women’s World Cup holding in Costa Rica as Nigeria’s Women U-20 national team, the Falconets beat South Korea 1-0 in their Sunday match.

The Falconets now is to face Canada in their last group match on Wednesday.

The Falconets made their first attempt to score a goal in the third minute through Bashirat Amoo, who tried a long-range effort from a free kick but was calmly saved by South Korea keeper Kim Kyeong-Hee.

In the 22nd minute, the Koreans went on the attack again with Lee Soo-In hitting a long-range strike but the ball hit woodwork.

With four minutes left in the first half, Amoo made a long-range strike which went off target.

Five minutes into the second half, Onyenezide tried a long cross into the area on the back of a pouring attack but South Korea’s keeper rose high to claim the ball.

In the 82nd minute, the goal finally came thanks to a brilliant long-range strike from Onyenezide which flew past the Korean keeper into the back of the net.

With the victory Nigeria’s Falconets have qualify for the quarter-finals despite having the outstanding match against Canada.

In their first match of the tournament, Nigeria’s Falconets beat the French U-20 women’s national team with a 1-0 similar margin.

asentv.tv brings to you up-to-date news and happening in sports and entertainment. Subscribe to our YouTube channel for interest program and videos. Be a contributor, send your sports news to our news desk – news@asentv.tv.