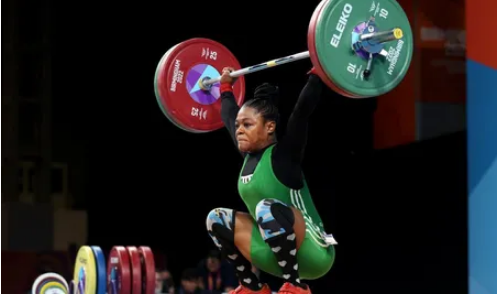 Lawal lifted a record 90kg in the snatch before also adding a record 116kg in the clean and jerk, to set a new overall Commonwealth best of 206kg.

Lalrinnunga lifted a record 140kg in the snatch before a further 160kg in the clean and jerk to set a Commonwealth target of 300kg.on Sun 31 Jul 2022

The 19-year-old, who also won the Commonwealth Championship title in the same weight in Tashkent last year, lifted a record 140kg in the snatch before a further 160kg in the clean and jerk to set a Commonwealth target of 300kg.

Glasgow 2014 bronze medallist Vaipava Ioane of Samoa secured silver after lifting a Games record 166kg in the clean and jerk, while Nigeria’s Edidiong Joseph Umoafia completed the podium with bronze.

Lalrinnunga was thankful his prayers were answered after claiming victory, admitting he overcame injury to triumph, saying: “I am very proud. I have had an elbow injury for a while, but I prepared well and tried very hard today.

“I could not reach my best performance [because of the injury] but Jesus helped me get this gold medal.

“My coach really motivated me, especially when I got injured during the warm-up. I prayed and cried a lot but I am now feeling better and am very proud.”

On his Games records, he added: “I am pleased with that total. I prepared for this competition lifting as much as 315-320kg. In the end, that total was enough and I am very happy.”

Achinta Sheuli took India’s gold-medal tally in the weightlifting to six with victory in the men’s 73kg division.