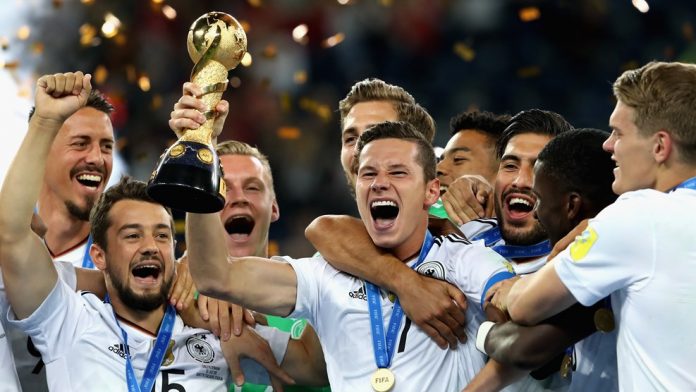 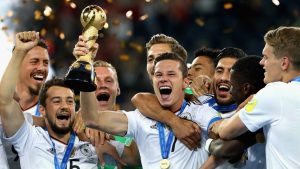 Germany have added the FIFA Confederations Cup to their bulging collection of trophies, winning this tournament for the first time after holding off an impressive but wasteful Chile side in Saint Petersburg.

They prevailed after the most intriguing of finals, which pitted Russia 2017’s youngest side against its oldest; the tournament’s deadliest attack against its meanest defence.

The match also provided the umpteenth example of Germany’s ability to prevail in seemingly any circumstances, as the world champions survived a relentless Chilean onslaught either side of Lars Stindl’s decisive goal. La Roja enjoyed 63 per cent of possession and three times as many touches in the opposition half in the first half, and peppered the German goal with shots throughout.

Ultimately, though, they paid the price for profligate finishing, not to mention a calamitous error by Marcelo Diaz in the build-up to Stindl’s trophy-winning tap-in.

Earlier in the day, Portugal had claimed the final place on the Russia 2017 podium in Moscow, coming from a goal down to beat Mexico thanks to Pepe’s stoppage-time leveller and Adrien Silva’s decisive 104th-minute penalty. It was a game full of drama and incident, including a red card for each side, with Nelson Semedo and Raul Jimenez making this the first game at a senior FIFA tournament to feature two dismissals in extra time.

Each of the last four third-place play-offs at the Confederations Cup has now gone to extra time and, remarkably, every one has ended with a European side celebrating.

The question in the mind of most football pundit after the FIFA Confederations cup is; will this team  be classified as the German A team despite the German team winning the converted trophy? Or if the experiment being tested by the German coach, Joachim Lowe that Germany be enough to make the team ready for come the next world cup?