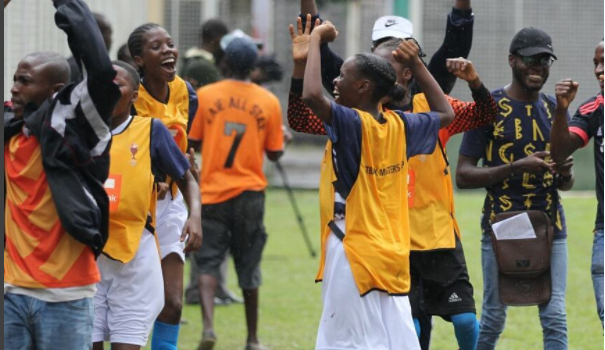 Ansar Ud Deen Girls High School,Itire will play defending Champion Queens College in the final of the season 6 edition GTBank Masters Cup after beating Ansar ud Deen College,Isolo 4-0 in a one sided game which saw Abiola Ayinla of Ansar ud Deen High School,Itire mesmerize the opposing side to win the most valuable player of the match.

In post match chat, Abiola Ayinla attributed her personal display and that of her team mates to hard work and playing to their coaches instruction.

“We expected victory today because we worked hard and trained very well for this game,I will like to appreciate our coach and my team mates for achieving this victory”

Ayinla who also hones her skills with a grassroots female football club Rising Stars Academy said she is interested in taking up a career in football after her education.

“I will like to continue with football after school because of the interest and passion I have for it”.

In the other semi final game Queen College,Yaba hammered Greensprings School,Lekki 3-0,to confirm their status as the clear favourite to defend the title which is becoming an exclusive preserve of the unity school that have won the last five editions of the competition.

Areori Dolapo from the Yaba based school won the most valuable player of the match having scored a brace to the delight of her parents who came to cheer her up.

An excited Dolapo told us after the game that she was surprised at the way to over ran Greensprings School that a tradition of playing good football.

“They told us the Greensprings are very good, so we were cautious initially but when we saw that we were dominating the game we became confident and came all out to play them”.

In the male category St Finbarrs gave a good account of themselves by sending the defending champion Greensprings School out of contention,it was an exciting game that lived up to its billing,the Akoka boys drew the first blood in the first half,while the Lekki Boys had to wait till the second half to equalize but they were hard done by a late winning goal which prevented the game from going into penalty shoot out.

In the other semi final game Anwar Ul-Islam College,Agege defeated Jubril Martins Memorial Grammar School,Iponri in a 10-9 penalty shoot out after the game ended 1-1 in regulation time.

Amongst the dignitary that came to watch the event was Senator Musiliu Obanikoro, and Mr Patrick Doyle, ex-students of Anwar Ul Islam College and St Finbarrs College.

St Finbarrs Colege will play Anwar UL-Islam College in the final in what has been tagged a grudge match.