ROD HARRINGTON has praised the impact of the World Series of Darts after another terrific year of events continued the growth of darts around the globe.

“The set-up that the PDC has got worldwide now is going to breed better and better players,” said Harrington.

“They get up and they are playing that dartboard on the big stage. It goes back to the systems in place on our youth tour, our Challenge Tour and our ProTour.” 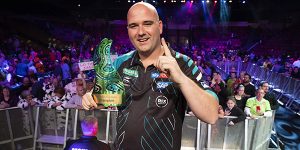 Rob Cross’ 11-6 victory over Van Gerwen in Brisbane last weekend ensured a different winner at every event for the first time on the World Series since the opening two events in 2013.

The win was Cross’ first on television since being crowned World Champion in January and was another reminder of the Hastings thrower’s meteoric rise since taking his first steps on the PDC circuit as an amateur little over two years ago.

“Having six different winners is testament to the PDC circuit – it’s breeding really tough players that can play at the top on the big stage,” Harrington added.

“For the last 18 months Van Gerwen has started to dominate, but now he’s not which makes it better for the game.

“He’ll come back, we know that. He played really well in Auckland but in Melbourne and Brisbane he certainly wasn’t on his A-game.

“When people got in front of him he didn’t have that extra gear to get back, and when he did get in front at times he was letting people back in the game. That’s not Van Gerwen.”

The World Series of Darts Finals will be held from November 2-4 at the Multiversum in Schwechat, Vienna, Austria.