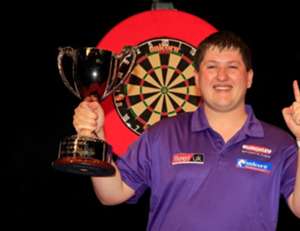 KEEGAN BROWN claimed PDC Unicorn World Youth Championship with a 6-4 victory over Rowby-John Rodriguez when the pair met in the final at The O2 in London.

The duo had won through the tournament’s early rounds in April before joining the stars of the Betway Premier League Darts in competing in front of 10,000 fans for the title.

Emerging Austrian ace Rodriguez made the better start as he took advantage of missed doubles from Brown to win the opening leg before taking out 97, and though the 21-year-old replied with a 121 bullseye checkout, his opponent then finished 64 to move 3-1 up.

Isle of Wight-based Brown, though, responded to level before taking out double 16 and 98 to move 5-3 up, with Rodriguez finishing 71 to remain in the contest before Brown scooped the £10,000 first prize on double 16.

Both players have now qualified to compete in the Grand Slam of Darts in November, while Brown is assured of a place in the full PDC World Championship in December at Alexandra Palace.

PDC Unicorn World Youth Championship
Keegan Brown v Rowby-John Rodriguez
Leg By Leg
0-1 – Brown wastes four chances to hold throw and the Austrian snatches the opening leg on double 16.
0-2 – Rodriguez takes out 97 on tops to double his lead in style.
1-2 – Brown finishes 121 on the bull to hit back and claim his first leg of the final.
1-3 – Rodriguez restores his two leg advantage with a clinical 64 finish.
2-3 – Brown keeps in the hunt as he hits double 16 to win the fifth leg.
3-3 – Brown misses five chances to level the game only for Rodriguez to waste two chances of his own and the Englishman returns to hit double one.
4-3 – Rodriguez misses two chances to edge ahead and Brown hits double 16 to lead the match for the first time.
5-3 – Brown wins a fourth leg in a row after taking out a 98 finish on double 12.
5-4 – Rodriguez keeps up the fight as he polishes off 71 in just two darts to win the ninth leg.
6-4 – Brown takes out a 45 finish on double 16 to become the 2014 PDC Unicorn World Youth Champion