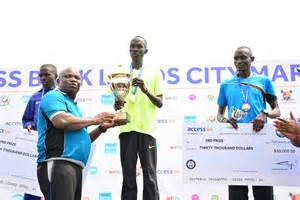 It was a wonderful turn out at the maiden edition of the Lagos City Marathon that held on the 11th of February, 2017.  The event organised by the Lagos State Government in collaboration with Access bank as title sponsor among others partners brought together people from all parts of the country, joined by other renounced international long distance runner from other Africa countries.

The 2017 Lagos City Marathon gives marathoners a true experience of Lagos, giving you the opportunity as a participant to explore the largest city in Africa with other marathoners from all parts of the world.

This year’s marathon was a more exciting experience, even than the maiden edition. Come #RunLagos.

This year edition featured participants who ran for different cause. Mr David Adjarher a.k.a Wrapperman  and organiser of the World Wrapper Man Challenge which started in 2016 participated in the year event.

In an interview with our correspondent Jide Olaniran, he said: ” I ran to raise $45,000 for educational projects all over Nigeria”