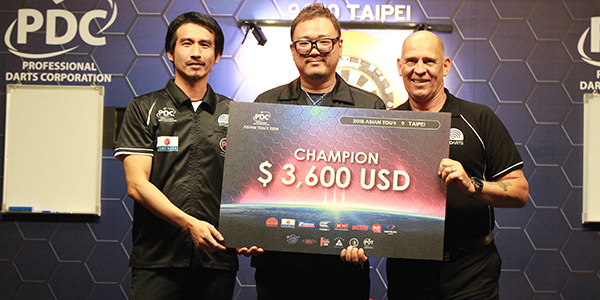 Asada followed up March’s success in Seoul and a runner-up finish in Kobe by taking victory in Saturday’s Event Nine as he survived eight missed match darts against Paul Lim. 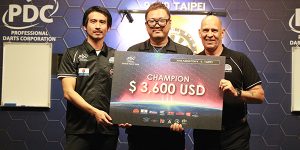 Legendary Singapore ace Lim led 5-4 before seeing his chance for victory slip away in leg ten, with the Japanese star taking the decider in 15 darts with a 120 finish.

Asada (above) averaged 105.80 in a last 16 win over Hsin Fu Yang and then averaged 104.40 to whitewash Daisuke Akamatsu in the quarter-finals, before edging out Hong Kong’s Royden Lam in the semis.

Lim (main image) was also in impressive form, overcoming three-time Asian Tour event winner Lourence Ilagan in the last 16, averaging almost 103 in his quarter-final win over Haruki Muramatsu before seeing off another Japanese ace, Yuki Yamada, in the last four.

Sunday’s event saw Lim go one better with a 5-3 triumph over Lourence Ilagan in the final.

Lim overcame Noel Malicdem in the quarter-finals before an impressive 5-0 whitewash win over Muramatsu in the semis.

The Singapore star, who was a quarter-finalist at Event Two in South Korea, is now only $400 behind the Order of Merit ranking number four Malidem.