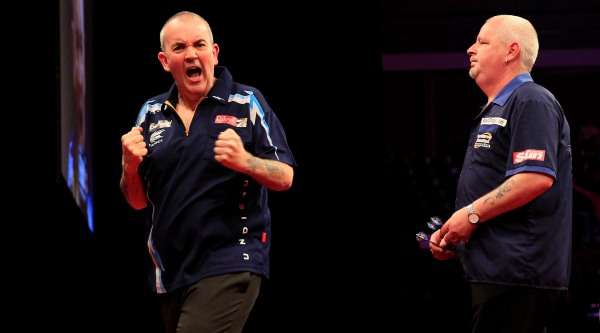 PHIL TAYLOR and Gary Anderson have secured their places in the Premier League Darts Play-Offs with victories at the Brighton Centre, as Michael van Gerwen topped the final league table for a second successive year.

Taylor’s brilliant revival after losing four of his opening five games as he defeated Thornton 7-5 to seal third place in the final Premier League Darts table.

Taylor showed the effect of a failing nerve which had manifested through out the season made life tough for himself as he missed his chances to wrap up a more comfortable win, before hitting double eight to seal his place in the Play-Offs next week’s.

The six-time Premier League Darts champion will travel to The O2 on the back of an 11-game unbeaten run, as he prepares to face rival Raymond van Barneveld in the semi-finals for a second successive year.

“I’m absolutely over the moon,” said Taylor. “Everybody wrote me off at the start of the season and they had every right to, because I was struggling – but I knew I’d come good in the end.

“I’ve got a great chance of winning this title now but I’ve got to get myself ready for the semi-finals now because it’s a big night next week.

“This is the best Premier League I’ve ever played in and I’ve loved it, even when I was losing. It was a matter of rebuilding and getting myself back on track, but I’ve done what I needed to to get into the Play-Offs.”

Anderson, the 2011 Premier League Darts winner, will also challenge to lift the trophy following his 7-4 victory over van Barneveld, a six-time semi-finalist who had already secured his place in the top four.

Anderson had trailed 2-1 early on but won five successive legs on his way to victory, with checkouts of 100 and 124 in successive legs helping to turn the game in his favour.

“It’s nice to get that over and done with to be honest,” admitted a relieved Anderson. “My scoring was great but my finishing in the first few legs was terrible, and I was still thinking about what I needed to do.

“The 124 was a big shot and it made a difference, and I came good in the end. I’ve gone seven games undefeated now and that’s great going into the Play-Offs.”

Those wins denied Peter Wright the chance to snatch a Play-Off spot, as the World Championship finalist ended the season in fifth place after he went down 7-5 to Michael van Gerwen, despite a 161 checkout bringing the sell-out Brighton crowd to its feet.

Van Gerwen signalled his intent to retain the title ahead of his semi-final against Anderson by posting the highest average of the league phase with a superb 110.85 in a performance which included three 11-dart finishes.

“I’m very proud to have finished at the top of the table for the second successive year and that shows that I’ve been the best player over 15 weeks – but I still have to perform in the semi-finals and final,” admitted van Gerwen.

“Last year I finished top of the league and then won the trophy and that’s what I want to do in the Play-Offs. I’m feeling good and my form’s great, as I showed with this win tonight, so I want to carry that on next week.”

Two-time World Champion Adrian Lewis ended the season on a high with a second successive victory as he defeated Dave Chisnall 7-4 in Brighton, but he remained in sixth place in the final league table standing

“It was a difficult game for both of us because there was nothing on the game, but we were good in patches and it’s great for me to get the win to finish the season,” said Lewis.

“I wasn’t consistent enough this season and didn’t deserve to be in the top four, but I’m putting a lot of work in both in practice and in other areas of my life to try to make myself better.”

The £150,000 prize money for the Betway Premier League Darts title will be decided next Thursday at The O2 in London, with van Gerwen’s semi-final with Anderson opening the night before van Barneveld meets Taylor.