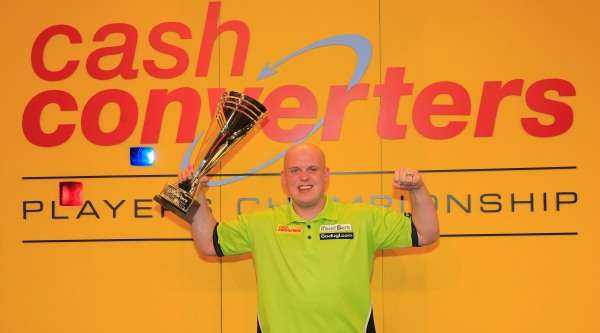 MICHAEL VAN GERWEN did it again as he stunned Phil Taylor with an amazing comeback from 6-3 down to win the Cash Converters Players Championship Finals title with an 11-7 triumph at the Butlins Minehead Resort on Sunday night.

The Dutch ace had entered the £250,000 event as the number one seed having topped the PDC ProTour Order of Merit with nine victories during 2013

He trailed Taylor 6-3 before turning on the screw to crank his engine in an incredible seven-leg burst which put him into a 10-6 advantage, hitting three 11-dart legs and a 110 finish to leave the World Champion rattled.

Taylor replied to win the 17th leg, but van Gerwen hit a 177 score to leave 24 in the next before hitting double 12 to complete a remarkable fightback.

Van Gerwen had knocked out Jamie Lewis, Adrian Lewis, Wes Newton and Andy Hamilton on his way to the final, and ended six months without a tournament win as he repeated his 2013 McCoy’s Premier League victory against Taylor.

The final saw the opening four legs shared before Taylor hit double 16 to lead 3-2, broke with an 88 finish in the sixth leg and then landed double 16 again to move 5-2 up.

Van Gerwen hit back in the eighth leg, but missed two darts to break throw in the next as Taylor posted double eight for a 6-3 lead.

The Dutchman began his comeback by winning the tenth leg on double 16, and returned from the break to win the next five legs in a stunning session to put himself ahead, hitting legs of 12, 14 and 11 darts to lead 7-6, before taking out a 110 checkout and another 11-darter.

Van Gerwen had earlier hit a 170 checkout during his 9-4 quarter-final defeat of Newton, and overcame Hamilton 10-5 in the semis.

Taylor had been at his brilliant best in averaging 111.58 in his 9-2 quarter-final triumph over Raymond van Barneveld, and won six successive legs in the semi-finals against Justin Pipe, turning a four-all scoreline into a 10-4 victory.

Justin Pipe’s run had seen him reach the semi-finals of the tournament for a second successive year in Minehead, as he reached that stage for a third time in a major televised event.