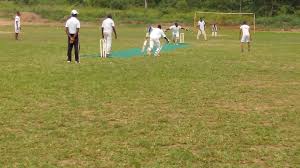 The President of the Nigeria Cricket Federation, Engineer Emeka Onyeama is happy with the success recorded so far by the present board in taking the sport back to schools across the 36 states and the Federal Capital Territory.
Engineer Onyeama made this known while restating his board’s commitment to make the sport popular among Nigerians and have a sustainable development in the future growth of the game in the country.
“When we came on board, our focus was how to institutionalize the game of cricket in Nigeria and popularize the game which has never been before.”
He expressed satisfaction with the successes that the NCF has recorded in the last 4 years in terms of creating awareness and taking cricket to the grassroots across Nigeria.
“First of all, we reinstated cricket in the National School Sports curriculum which has seen students participating in the last 3 editions held since the inception of this administration.
“We also got cricket back into NUGA. As I speak to you now, over 6 Universities just completed NUGA cricket tournament in the University of Agriculture, Maiduguri. That is another platform we are holding strongly after we rejuvenated it and it is now waxing stronger.
“Also at the 2nd edition of the National Youth Games held in Ilorin in 2016, cricket (men and women) was the only team sport featured”.
These unprecedented achievements Onyeama said, were the results of well-orchestrated plans and the present board’s determination to rewrite the story of cricket across the West African sub region.
“It has never happened before. Today, cricket is no longer a lesser sport but a sport to reckon with in Nigeria. Despite not making international participation and ranking by the International Cricket Council as its major goal, the Cricket President was quick to point that, “In addition to popularizing the game, earlier in the year, we were out there playing international tournaments. We have always been out there playing among countries.
“In as much as we have not gained promotion in recent days, it does not mean that we are not doing anything.”
He explained that with the increased popularity and the wide acceptance of Cricket in Nigeria, having a sustainable development in terms of future growth of the game will become achievable with the provision of facilities that can support that growth.
Onyeama concluded by advising all stakeholders to shun destructive politicking ahead of the 2017 Sports Federations elections billed for May 30th.