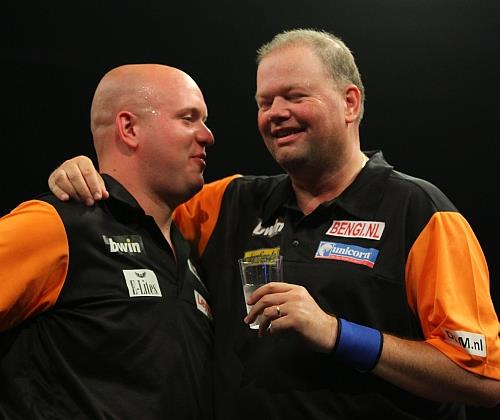 The Dutch pair of Michael Van Gerwen and Raymond Van Barneveld overcame the fierce English opposition of Phil Taylor and Adrian Lewis to win the finals of the 2014 Bwin World Cup of Darts which held on Sunday, 8th June at the Sporthalle in Hamburg, Germany. With this the pair crashed the English hope of winning a third successive world cup title.

Michael Van Gerwen, current world champion beat Phil Taylor, 16 times champion in a superb performance  by whitewashing him 4-0 in the opening singles match with a 103 average before van Barneveld powered past Lewis without dropping a leg.

World Champion, van Gerwen had been defeated 4-3 by Brendan Dolan in their semi-final Singles contest, only for van Barneveld to whitewash Michael Mansell before the pair teamed up to win the Doubles decider 4-0 with an incredible 117.88 average. thereby giving them a place to play in the finals.

Van Gerwen then defeated Lewis 4-2 in their Singles clash as he secured a 3-0 victory for the Netherlands in the final – meaning that their nation holds the World Championship, Premier League Darts and bwin World Cup of Darts titles!

With this victory, the Netherlands’ is winning this title for the second time having won the maiden edition that held in England in 2010.

Meanwhile , the discriminatory sports policy of the Nigeria government and attitude of sports administrators towards a selection of sports remains unchanged despite Nigeria absence at the highest level of major competitions in Darts. South Africa remained the only African nation that has encouraged and participated at major international events in professional Darts.

Nigeria discriminatory sports policy had classified Darts amongst the optional sport which limits the obligation of the government to its development at all level.