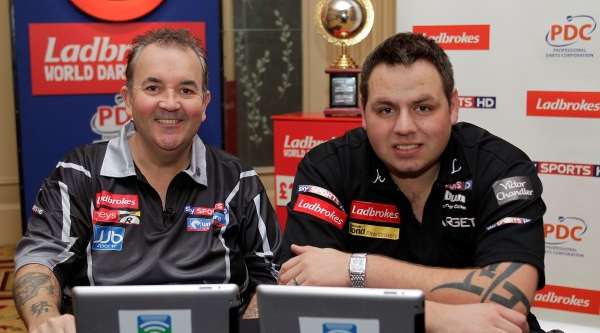 Picture of Phil Taylor and Adrian Lewis at the 2012 Ladbroke  World Darts Championship at Alexandria palace.

16 times world champion, Phil Taylor shall be  hoping that his latest history-making achievement of two nine darts in Wigan at the Coral Uk Opens Darts championship qualifier can help to kick-start his Premier League Darts season when he meets Adrian Lewis at the BIC in Bournemouth after losing to Michael Van Gerwen last week.

The 53-year-old Stoke legend most recently lost in the first round of the opening UK Open Qualifier to youngster Keegan Brown – but bounced back by reaching the semi-finals before hitting an amazing two nine-dart finishes as he went on to win the third qualifier.

He first came in the last 16 as he swept aside Andy Hamilton, before sealing a 6-2 victory over Lewis in the final with his second perfect leg..

Taylor‘s pair of nine-darters saw him create more history as only the second time in the sport’s history where a player has achieved two perfect legs in the same event – matching his own landmark in the 2010 Premier League Darts final against James Wade.

And, having had a six-week break, and a change of darts, between his World Championship exit to Michael Smith in December and the wowfull performance at Premier League’sopening night, Taylor admitted that his results in Wigan were an ideal confidence boost ahead of the clash with Lewis in Bournemouth.

Taylor’s clash against fellow stoke man, Lewis will be amongst the high point of five match to be held on Thursday night at the BIC in Bournemouth, as the tournament’s longest-serving venue which will be hosting its ninth Premier League Darts event. Can Taylor repeat his last week performance in Wigan when both player meet again?

Former Dutch no 1 player, Raymond van Barneveld who hit a nine-darter in the first Premier League Darts night in Bournemouth back in 2006, opens the event against Wes Newton, before newcomers Dave Chisnall and Peter Wright then face off.