The pair of Emmanuel Odufejo and Olufemi Odeyemi delivered an action packed, entertaining  and informative episode of Sportsweekly, a program that discusses all sports events involving Africans. This week’s episode featured Tennis, Darts, Boxing, Athletics and the beautiful game of Football.

In Boxing, world heavyweight champion Anthony Joshua has been granted an exception by the Int’l Boxing Federation (IBF) to fight Wladimir Klitschko for their heavyweight title and the bout must take place before December 2nd 2017. The winner will then go on to face Kubrat Pulev in a title defence.

In Tennis, the only players from Africa,  South Africa’s Kevin Anderson & Tunisia’s Jebaur Ons were eliminated from the French Open.

In Darts, Netherlands won the World cup of darts for a 3rd time as Michael van Gerwen and Raymond van Barneveld defeated Wales’ Gerwyn Price and Mark Webster 3-1 in Sunday’s final in Frankfurt. South Africa was the only African country that featured in this event.

The Nigerian contingent to the 2017 ITTF world championship consisting of Segun Toriola, Aruna Quadri, Ojo Onaolapo, Olajide Omotayo and Funke Oshonaike, Edem Effiong and Cecilia Akpan have all crashed  out of the championship. Aruna Quadri was the only player who went as far as the 2nd round.

The Cleveland Cavaliers (113) lost game 3 of the NBA Finals to the Golden State Warriors (118) who grabbed an impressive 11 points in the last 3 minutes of the game with Kevin Durant scoring a game high 31 points.

In the NPFL, Plateau United tops the league table with 42 points while the trio of FC Ifeanyi Ubah, El Kanemi Warriors and MFM FC all have 37 points in 2nd, 3rd and 4th positions respectively. MFM FC’s Stephen Odey continues to lead the goal scorers chart with 14 while Samuel Mathias of Kano Pillars is hot on his heels with 11 goals.

The Spanish LaLiga on Tuesday announced a partnership with Nigerian Sports Agency, Legacy Sports. At a press briefing that held on Tuesday in Lagos, the General Manager International Development of LaLiga, Mr Vicente Casado said this was done as part of its plan to support football development in Nigeria and also bring the LaLiga closer to its fans in the Country.

The Nigeria Football Federation (NFF) alongside the League Management Company (LMC) have consummated a multi-faceted strategic agreement in general football development with the Football Federation and Premier League body of the Kingdom of Morocco. On Thursday, NFF President Amaju Pinnick and NFF 2nd Vice President/LMC Chairman Shehu Dikko put pen to paper on a memorandum of understanding with their Moroccan counterparts, the result of detailed discussions, deliberations and considerations over time. The strategic partnership is for technical development, exchange of ideas and contacts, training support, friendly matches, use of facilities and joint marketing where necessary.

The Lagos State FA presented a 6 year review of their operations and achievements. They highlighted their success stories as regards the Lagos FA cup, the Principal’s cup and the Lagos Beach Soccer. However, questions still arise over the quality of facilities and equipment around the state and standard of coaching available  local talents around the state.

On the European stage, current LaLiga champions, Shehu Dikko defeated the Italian giant, Juventus 4-1 last Saturday in Cardiff to retain the UCL title becoming the first team and coach to win the UCL back to back.

African representatives at the FIFA U20 world cup including Zambia, Senegal, South Africa have all crashed out of the tournament with England, Italy, Uruguay and Venezuela left in the tournament.

Lastly, the Super Eagles of Nigeria will lock horns with the Bafana Bafana of South Africa in a Group E fixture AFCON 2019 Qualifier. The match kicks off at six o’clock on Saturday evening at the Godswill Akpabio Stadium, Uyo on Saturday June 10.

Bafana Bafana arrived in Nigeria on Wednesday with 25 “soldiers” and 12 officials ready to extend their record 17-game unbeaten run (W9, D8). They have not tasted defeat since a third-string selection lost 2-0 at home to Angola in an African Nations Championship (CHAN) qualifier in October 2015. Since then they have beaten Egypt and Senegal‚ and drawn with African champions Cameroon (twice). It is the longest current unbeaten streak of any nation in Africa. The Super Eagles also have not lost a game since appointing their Franco-German coach, Gernot Rorh. Meanwhile, neither the Super Eagles nor Bafana Bafana qualified for the last AFCON in Gabon earlier this year so both of them will see this as a must-win game. 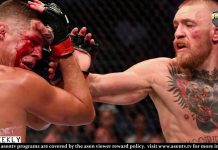