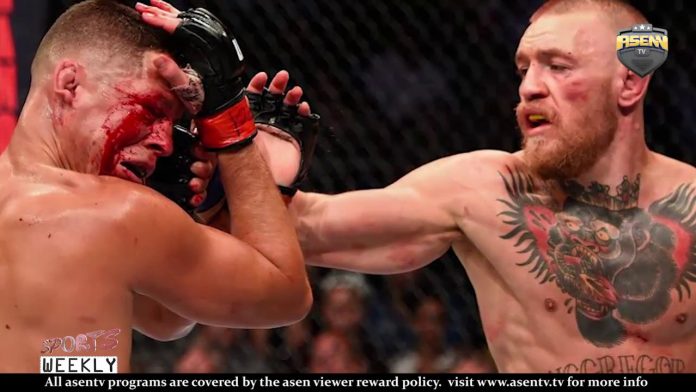 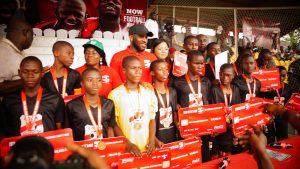 Emmanuel Odufejo and Joakim Idada both presented an exhilarating edition of SPORTS WEEKLY  in their usual racy-pacy, entertaining and educating style while discussing sports stories developing around the world with an African bent. Grassroot sport, Milo All stars Basketball championship and COPAcocacola U -15 in retrospect.

Top Africa boxers from all over Africa gatther in Congo Brazzaville for the 2017 Africa Boxing championship which will double as qualifiers for the World Boxing Championship slated for Berlin, Germany from August 25th – September 3rd 2017.  Seven Nigerian boxers are participant. asentv.tv’s Sportsweekly  can confirm that  one of the Nigerian boxers, Godwin Ambrose, has crashed out of the men’s heavyweight category after losing 4-1 to his Congolese counterpart. Yetunde Onanuga defeated Keomogetse Kenosi from Botswana 5-0 in the lightweight quarterfinals while Osita Umeh also defeated Fallon Niang from Senegal 5-0 in the welterweight category.

There were controversies during the elections such as in Taekwondo where George Ashiru, the former president was disqualified & has filed a petition signed by delegates from 28 states. Margaret Binga was announced as the new President of the Taekwondo Federation. In Athletics, punches were exchanged, three candidates disqualified and final election results showed 43-2 votes in favour of Ibrahim Shehu Gusau who becomes the new President of the federation. In Rugby Football, there were no elections due to constitutional issues, elections will now hold on 1st July 2017 in Lagos. In Basketball, delegates were conspicuously absent; elections did not hold within the Abuja stadium but held in an unknown hotel within the Abuja metropolis. We can  officially confirm to you that there are now two broad factions within the basketball federation, one headed by Ahmadu Kida and the other headed by Tijani Umar.

Discussing grassroot sports, it was all praises for Nestle Milo and Coca Cola Nigeria sponsors of the Milo All Secondary School Basketball Championship and COPAcocacola U-15 football Championship. Both competition featured approximately 5000 secondary schools. Joachim said:

“these things are to be done by government so that we can free the cash that these private companies are investing in grassroots sports. So that, these company can take advantage of the business and marketing opportunity available at  sports for us to maximize it”

“I was rather go the way of Coca cola where you have educational trust fund. We should encourage the corporate bodies to tow that line rather than giving cash …….”

The news  about the Sports and Fitness centre in Kano with 2 5-aside pitches that was recently opened by  Super Eagles and Leicester City winger, Ahmed Musa did not elicit that type of enthusiastic response from Idada Joachim. Idada Joachim, Sports analyst did not agree that it is newsworthy as it was a private business initiative.

Michael Emenalo, Chelsea technical director, acquires UEFA pro license (the highest coaching license in football mgt). He won 14 caps for Nigeria including the 1994 world cup. He joined Chelsea in 2007 as a scout before being promoted to assistant coach under Carlo Ancelotti in 2010.

The FIFA Confederations Cup is ongoing with 8 goals scored in the first 3 matches with all of Russia, Chile, Mexico & Portugal scoring 2 goals each in their opening matches. Only Cameroon and New Zealand are yet to score. Chile defeated Cameroon 2-0 (Africa’s only representative). Arturo Vidal and Eduardo Vargas scored.

Watch the full program below.