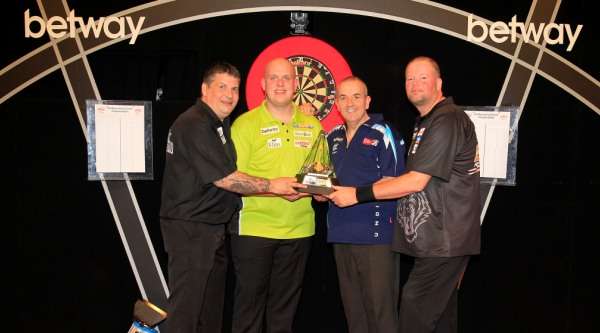 THE 2014 Betway Premier League Darts title will be decided on Thursday night, as Michael van Gerwen, Raymond van Barneveld, Phil Taylor and Gary Anderson do battle in the Play-Offs at The O2 in London.

Taylor, a six-time Premier League champion had to overcome his shaky start this season to be unbeaten in his final 11 matches as he moved from Ninth position with 4 points in week six to third in the table.

2011 champion Anderson, meanwhile, was unbeaten in his last seven games as he edged out Peter Wright to claim fourth spot despite his excellent performance in his maiden appearance in the premier league. Despite the herculean task of meeting reigning champion, Michael Van Gerwan in the semis; Gary will be playing  to win back the title he won three years ago at Wembley.

Meanwhile, old foes dutchman Raymond Van Barneveld will be slogging it out with Phil Taylor in the second semis. The Dutchman will be gunning to achieve the much elusive victory over Phil Taylor in the premier league in this match having met 18 times in the past.

Anderson lost out to van Gerwen in the World Championship in December – letting a 3-1 lead slip as he went down 4-3 in a defeat which he admits has fuelled his resurgence so far in 2014, with four ranking victories seeing him return to the world’s top 16.
He also went down 7-5 when the pair met in the league phase in Leeds in March, before claiming a 7-4 victory over the Dutchman in Birmingham three weeks ago.

This may just be a repeat of last year final if Taylor meets van Gerwen at The O2.  Taylor has won six previous Premier League Darts titles and bounced back from losing four of his opening five games to be unbeaten in his last 11 matches this season is not mean fit which proves that he can do the job this time around. Taylor recorded in incredible 0-7 loss Michael in the week one of the season.

Van Gerwen has been the favourite to take the £150,000, with Taylor coming second best in chance of winning.