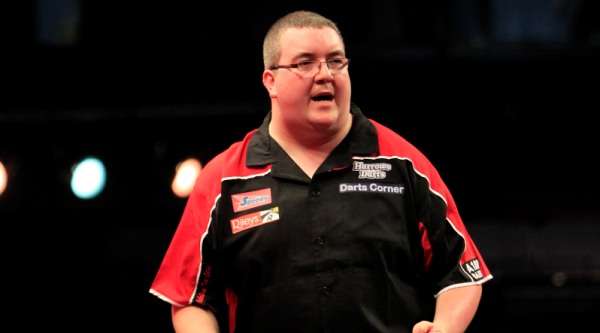 After moving from the British Darts Organisation to join the PDC, STEPHEN BUNTING, winner of the BDO World Championship a.k.a Lakeside defeated Andrew Gilding in a dramatic deciding leg final of the second Coral UK Open Qualifier to claim his first PDC Pro Tour title in just his second event, at the Robin Park Tennis Centre in Wigan..

The £10,000 winning prize sees Bunting guarantee his place at the televised finals of the UK Open in March, as well as seeing him rise up inside the top 80 of the PDC Order of Merit after just two events played.

The Liverpool ace then claimed a brace of 6-4 wins over John Bowles and nine-dart hero’s Terry Jenkins, to move into the last eight where he overcame Paul Nicholson by a 6-2 margin.

Bunting repeated the trick in the last four as he beat 1996 World ChampionSteve Beaton 6-2 to claim his place in the final where he faced Gilding.

In the early stages of the match both players showed confidence challenge in their first PDC Pro Tour fina but Bunting managed to come away with a 2-1 advantage before Gilding drew level with a 76 finish in the fourth leg.

Gilding took a lead in the fifth leg before Bunting replied by hitting double ten only for his opponent to win the seventh leg on double six for a 4-3 lead.

Bunting raised hopes briefly of a nine-darter which excited the fans, after starting the eighth with scores of 180 and 177. It wasn’t to be after converting a brilliant 130 checkout on the bullseye to lead 5-4.

Gilding showed great nerve to hit a 76 finish to force a deciding leg but Bunting produced his best form of the game at its conclusion as he threw in a 180 before winning the first prize with a fabulous 161 checkout.

There, he ended the hopes of the talented Northern Irishman Daryl Gurney with a 6-4 win to reach the last four for the second time, after reaching the same stage in Ireland, last October.

Gilding faced a daunting task when he played 16-time World Champion Phil Taylor in the semi’s but defied a 104 average from his illustrious opponent to reach his first Pro Tour Final with a fantastic 6-4 win.

Phil Taylor produced a much improved display in Wigan on Saturday, following his whitewash defeat to Michael van Gerwen in the opening night of the 2014 Premier League Darts, and a first game defeat to Keegan Brown, in Friday’s Coral UK Open Qualifier.

After a tough 6-4 win in his first game against Joe Cullen, the world number two enjoyed easier progress with a 6-0 thrashing of Darren Johnson before confidence boosting wins over Peter Wright and Mervyn King secured his place in the last eight.

At that stage he defeated Justin Pipe by a 6-3 margin with the aid of a 101 average before falling to a surprise semi-final loss to Gilding, but took away £2,500 for his efforts, securing his qualification for Minehead next month.

Taylor was joined in the semi-finals by Steve Beaton who backed up his quarter-final showing 24 hours earlier with a fine run to semi-finals on Saturday, where he was denied a place in the final by Bunting.

Daryl Gurney reached his second Pro Tour quarter-final thanks to a dramatic 6-5 win where he hit a 146 checkout to knock out World Champion Michael van Gerwen before being edged out a by 6-4 margin to Gilding in the last eight.

The triple header of Coral UK Open Qualifiers concludes on Sunday at the Robin Park Tennis Centre in Wigan, where the third qualifier will take place with £50,000 on offer.