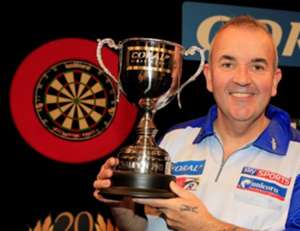 PHIL TAYLOR won the inaugural Coral Masters with style at the Royal Highland Centre in Edinburgh , sweeping aside Stoke rival Adrian Lewis 10-1 with a stunning performance in the final.

The 16-time World Champion picked up the £50,000 winner’s cheque and became the first name on the new Masters trophy as event winner, which featured the world’s top 16.

Taylor followed up his earlier victories against Terry Jenkins and Wes Newton with a 10-1 rout of James Wade in their disappointing semi-final, with the left-hander unable to recapture the form exhibited against Simon Whitlock which saw him produce an amazing comeback against day earlier.

Taylor’s merciless charge to the title continued in the final as he took the first nine legs without reply in a remarkable run, hitting a ten-dart finish and punishing missed doubles from Lewis in four of the legs.

Adrian Lewis; world number three, booked his place in the final with a thrilling 10-9 defeat of Raymond van Barneveld, finally won the tenth leg to prevent a clear and complete a whitewash after Taylor missed the bull.

The respite, though, was short-lived as Taylor completed an amazing triumph by hitting a fourth 180 in a 12-darter as double 12 gave him the title with an average of 108.50 for the final.

For coming second Lewis took home £20,000 after reaching and the final. Not withstanding his loss in the final, he performed superbly to delight the Scottish crowd in wins over Kim Huybrechts, Robert Thornton and Raymond van Barneveld.

The semi-final with van Barneveld proved to be arguably the game of the tournament, with Lewis taking an early 3-1 lead with an 11-darter, and a 104 finish put him 4-2 up before van Barneveld hit back to lead 5-4.

The pair shared the next eight legs, with Lewis’ 154 checkout cancelled out by a 143 finish from van Barneveld as the Dutchman moved to the brink of victory at 9-8 – only for the Stoke ace to force a decider with a 13-dart leg before claiming victory by finishing 116 for a 12-darter.

In the final, Lewis opened with a 180, the 28-year-old ran out of steam as Taylor, who averaged over 110 for the first half of the decider, proved simply too strong to be defeated.

Match Information
Semi-Finals
Phil Taylor v James Wade
0-0 – James Wade wins the bull and will throw first.
1-0 – Taylor secures an immediate break of throw with a 14-darter, landing double four to take the opening leg.
2-0 – Double ten sees Taylor move two legs up.
2-1 – Taylor hits a 180 in being first to a finish, but misses five darts at double 16 and double eight to allow Wade in on tops to get off the mark.
3-1 – Taylor misses two further darts at double 16, but returns to hit the bed at the third time of asking to deny Wade the chance to level.
4-1 – Taylor hits double 14 to move three legs clear.
5-1 – Taylor returns from the break to win a third successive leg in establishing a four-leg cushion.
6-1 – Taylor opens with a 180 and finishes tops for an 11-darter to pull clear.
7-1 – The World Champion finishes 94 on tops to move three legs away from the final.
8-1 – Taylor lands double top to continue his charge.
9-1 – Taylor takes out 96 on double 18 to move to the brink of victory.
10-1 – Taylor seals victory in style with a brilliant 12-dart leg, taking out 121 on double eight to end with an average of 106.35.

Final
Phil Taylor v Adrian Lewis
0-0 – Phil Taylor wins the bull and will throw first.
1-0 – Lewis, still on a high following his superb semi-final win, opens the final with a 180 but can only wait on 40 as Taylor takes out 120 to win the opening leg.
2-0 – The pair hit 180s to leave a finish after nine darts, with Lewis missing two darts at tops to allow Taylor in to finish 83 on the bull to break.
3-0 – Double two sees Taylor take the third leg.
4-0 – Taylor hits a 180 in a stunning ten-darter to break once more, this time finishing double eight.
5-0 – Taylor takes out double 12 to win a fifth successive leg, taking his average to 115.62!
6-0 – Taylor misses tops for a 107 finish, but returns after a miss from Lewis to hit the bed for a third break of throw in the final.
7-0 – Double 16 sees Taylor move three legs away from the title.
8-0 – Lewis misses darts at double top and ten, and double eight sees Taylor continue his charge.
9-0 – Lewis misses two darts at double 18, and tops for a 13-darter puts Taylor on the brink of victory.
9-1 – Taylor posts another maximum, but misses the bull for a 135 finish to claim a whitewash win as Lewis finishes tops for a 14-darter to get off the mark.
10-1 – Lewis’ fightback proves short-lived, as Taylor hits a fourth 180 of the game and takes out 81 on double 12 to complete a brilliant triumph.