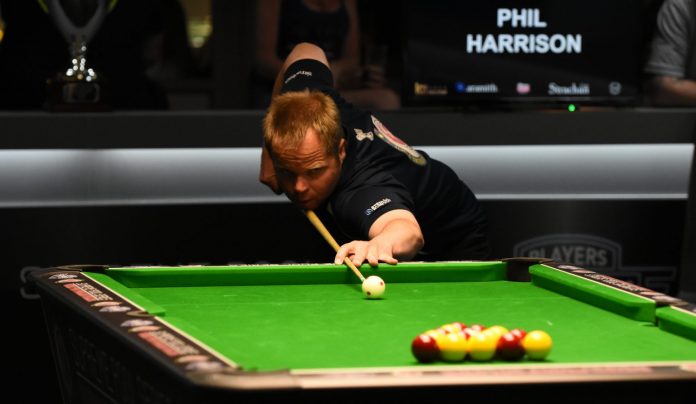 Phil Harrison put on a clinic in world-class pool as he advanced to the last 16 of the 2021 Ultimate Pool Masters.

The evergreen 46-year-old began his night in Newcastle-under-Lyme with a tricky opening round affair against former Players Amateur Championship winner Greg Batten.

He set his stall out early on, immediately clearing up from his opponent’s dry break in the first frame before producing a break dish in the second. Devon-based Batten followed suit in the third with a break and clearance of his own but Harrison claimed frames four and five to open up a 4-1 lead.

The following two frames were shared, and with little over ten minutes on the 50-minute match-clock remaining, it appeared as if there was only one winner. However, Batten rallied in rapid fashion; reverse clearing from Harrison’s break in frame eight, break clearing in frame nine and then reverse clearing again to dramatically level at 5-5.

Tension ramped up, both players were now pushed by the 15-second shot-clock, although the experienced Harrison kept his cool with a fine response in frame 11 that concluded with a cross double on the black to regain the advantage. With just over two minutes left, Batten was forced to go for an unlikely finish in the next, and when an attempted double went wrong, the contest was effectively over.

The evening’s second tie brought together Marc Farnsworth and Tom Price. The opening stages were a mixed bag – although both cueists showed signs of their excellence – and the pair couldn’t be separated after six frames.

However, Farnsworth – the odds-on group favourite before a ball was struck – moved it up another level as he strung together four successive frames to win 7-3.

The group final pitched together two former world champions in a mouthwatering clash that was expected to go close – yet the final outcome was anything but.

A world title winner in 2009, Harrison went 2-0 ahead before registering a reverse dish and a break dish to forge a 4-0 profit in the race to eight. Farnsworth got on the board with a break and clearance in the fifth but that would be as good as it got for the man from the north-east, who was a spectator bar one shot for the next three frames.

‘The Farmer’ break dished in the sixth, reverse dished in the seventh and break dished again in the eighth to move 7-1 up. Harrison had cleared directly from his break on three consecutive occasions and between the pair it was six frames in a row where there was a clearance immediately after the break shot.

With the game nearly up, Farnsworth was on for yet another break dish in frame nine, but when he unexpectedly missed the black, Harrison mopped up to complete a supreme and resounding 8-1 triumph.

A quarter-finalist at the quicker-paced Vinny Champions League, Harrison was visibly more comfortable this time around with the 45-second shot-clock. He joins previous group winners Jordan Shepherd and Chris Melling in what is shaping up to be an irresistible opening section in phase two later this year.