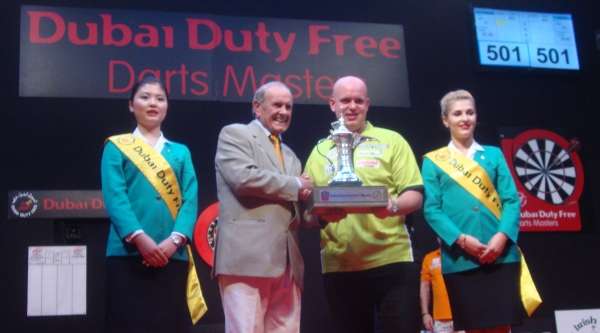 The Dutch ace had been victorious in the inaugural World Series of Darts event in Dubai 12 months ago, and retained the $50,000 title in impressive fashion.

World Champion van Gerwen, who had edged past James Wade in Thursday’s quarter-finals, enjoyed an 11-7 win over world number three Adrian Lewis in his semi-final before repeating the scoreline against Wright in the decider.

In both games, van Gerwen enjoyed a surge where he pulled clear, with his semi-final turning in a key 12th leg as Lewis missed one dart at double top to move 7-5 up, allowing his rival to level.

Van Gerwen then won another four straight legs as he moved 10-6 up before sealing the victory with an 11-dart finish.

Wright held a 3-2 lead early in the final – a repeat of their World Championship decider on New Year’s Day – only to see van Gerwen moved ahead as he won four successive legs from four-all to lead 8-4.

Van Gerwen’s 116 finish as he moved 9-5 up was bettered by a 158 checkout from Wright, but the Dutchman took his tally of 180s for the final to 11 with two in the next three legs as he completed back-to-back wins in Dubai.

“This is a very special win for me,” said van Gerwen. “This is the first time I’ve won a major title twice in a row and it’s absolutely fantastic.

“To win this great trophy again is huge and it means a lot to win again in this country means a lot because it’s one of the nicest places in the world.

“I’ve worked so hard for this for the past two days. I thought I was the better player throughout the final but I made it difficult for myself at times – but I got the win and that’s all that mattered.

“It was a tough game against James Wade on Thursday and it was the same again when I played Adrian and Peter, and I think I was the best player in the tournament.

“Peter hit a couple of good finishes in the final to keep himself in the final, but it doesn’t matter how you win and I’ve got the trophy in my hands. I think I showed my class in this tournament and I’m very proud of myself.

Wright had followed up his brilliant victory over Phil Taylor in the quarter-finals by overcoming Dave Chisnall 11-7 in their semi-final, as he marked his first World Series of Darts event by reaching the decider.

“It’s been a brilliant experience,” said Wright. “The venue was amazing and the crowds were fantastic and Dubai is a beautiful place, and hopefully I’ll be back next year to try and take the trophy away from Michael.

“I took a couple of big finishes out but I was too inconsistent with my scores. I should have made it five-each but I was struggling with my consistency.

“It’s all about stepping stones and learning, and each time I’m getting closer and closer, and this will give me lots of confidence for the tournaments which are coming up.”

Chisnall had performed superbly on his World Series of Darts debut in a thrilling quarter-final win over Simon Whitlock, but paid for missing 35 darts at a double against Wright.

“It was a brilliant experience,” he said. “The crowds were great and I just had one of those nights where I didn’t perform and didn’t deserve to win.

“My finishing early on in the game let me down Normally when I miss doubles they’re close but they weren’t even close tonight. It’s a beautiful place and hopefully I’ll be back next year.”

Reigning UK Open champion Lewis had been hoping to win his first title on the World Series of Darts stage, but was denied by his great rival van Gerwen in a thrilling semi-final contest.

Lewis admitted: “At five-all I felt I should have been ahead, and I missed the dart to go 7-5 and Michael took full advantage.

“I’m disappointed because I thought I was the better player, scoring-wise, for three-quarters of the game but then my darts started slipping out of my hand.

“Normally my hands don’t sweat but I was tonight and my darts were dipping in, and I couldn’t feel my darts like I normally do. I’ll take it on the chin and move on but it’s a fantastic event and I’ve loved being a part of it.”

The World Series of Darts will continue in August, with further tournaments to be held in Perth from August 22-24 and in Sydney from August 28-30.

MATCH INFORMATION
SEMI-FINALS
Michael van Gerwen v Adrian Lewis
0-0 – Michael van Gerwen wins the bull and throws first.
1-0 – van Gerwen makes a confident start by taking out 86 for a 14-dart opening leg.
1-1 – Lewis lands double ten as he levels the game.
1-2 – van Gerwen posts the game’s first 180, but he is unable to prevent Lewis breaking throw with a superb 86 finish.
1-3 – Lewis hits a 174 score, and finishes 60 on tops to move two legs clear in a superb opening.
2-3 – van Gerwen opens the leg with a 180 before taking out 82 with a bullseye, double 16 combination to complete an 11-darter as he hits back.
3-3 – van Gerwen misses double 19 for a 158 finish, but Lewis is unable to hit tops to allow the Dutchman back in on double eight.
4-3 – Lewis posts his first 180 of the game, but van Gerwen lands tops to regain the lead.
4-4 – van Gerwen opens with a 180, but Lewis replies with a maximum before finishing 91 in two darts for an 11-dart leg to level.
5-4 – van Gerwen moves back in front in a dramatic leg, with Lewis missing nine darts at doubles to break throw to allow the Dutchman to recover from four misses of his own to land double five.
5-5 – Lewis hits double top at the first time of asking to level the game.
5-6 – Lewis claims a potentially key break of throw as he regains the lead.
6-6 – Lewis misses one dart at tops to finish 76 to move two legs clear, allowing van Gerwen back in to finish double ten to break back.
7-6 – van Gerwen hits his fourth 180 of the game to leave 46, and lands double 16 to move back ahead.
8-6 – van Gerwen this time lands a 170 score to leave 51, with another double 16 finish helping him break to move two legs clear.
9-6 – van Gerwen’s charge continues as he lands two 180s in a 12-dart finish to win a fourth successive leg.
10-6 – Lewis is punished for more missed doubles as van Gerwen edges to the brink of a place in the final by capitalising on double 16.
10-7 – Lewis opens with a 180 and posts tops to break throw and keep alive his hopes in the tournament.
11-7 – van Gerwen kills the game off in style with a brilliant 11-dart leg as an 87 finish puts him into the final for a second successive year.

Peter Wright v Dave Chisnall
0-0 – Peter Wright wins the bull and throws first.
1-0 – Wright claims first blood by posting double 16.
1-1 – Chisnall scores 180 and 145 as he leaves 36, before levelling the game on double nine.
2-1 – Chisnall hits another maximum, but this time misses double 18 and two darts at double nine to allow Wright in on tops to hold throw.
3-1 – Chisnall kicks off the leg with his third 180 of the game, but pays for six missed doubles across three visits as Wright steps in the break throw.
3-2 – Double eight sees Chisnall reply with a break of his own.
3-3 – Wright hits a 180 but misses six darts at a double, and Chisnall capitalises on double nine.
4-3 – Chisnall fires in a 180, his fourth of the game, but is again punished for missed doubles as five off-target darts allow Wright back in from his own misses to post double four.
5-3 – A fifth 180 of the game pushes Chisnall clear, but he misses double 19 for a 105 finish – agonisingly seeing his dart land just in the adjoining double three bed – to allow Wright in to finish double 16 with his third dart to break.
5-4 – The roles are reversed as Wright opens with a 180 but misses double eight and four to win another leg, and Chisnall takes out 69 on tops to break back.
5-5 – Chisnall initially misses tops for a 120 checkout, but returns to post double five to level the contest.
6-5 – Wright hits a 180, but misses five darts at double 12 to win the leg – only for Chisnall to miss a dart at tops to lead for the first time, allowing the Scot back in to finally land double 12.
7-5 – Wright breaks throw to move two legs clear once again.
8-5 – Double top sees Wright win a third successive leg as he moves clear for the first time.
8-6 – Chisnall hits back with a 12-darter, hitting a 180 and double 16.
9-6 – Chisnall misses three darts at tops to steal the leg, allowing Wright in to land double six to move two legs away from the final.
10-6 – Wright moves a leg away from the final with a killer break – taking out 96 on double eight with Chisnall waiting on 40.
10-7 – Chisnall keeps his hopes alive by landing double 18 to break back.
10-8 – Chisnall’s fightback continues as he finishes 76 on double eight.
11-8 – Wright misses double 14 for a 148 finish to complete the win, but returns to hit the bed with his fourth match dart as he secures a place in the final against Michael van Gerwen.

FINAL
Michael van Gerwen v Peter Wright
0-0 – Peter Wright wins the bull and will throw first.
0-1 – van Gerwen opens the game with a 180, but Wright scores 140 and 180 of his own before taking out 138 to complete a 12-darter to win the first leg.
1-1 – The reigning champion lands a 180 and tops to level the game.
2-1 – van Gerwen adds a third maximum in as many legs, before finish double two to break throw and move ahead.
2-2 – van Gerwen misses three darts at double 18, and Wright punishes him by taking out 82 on tops to break back.
2-3 – Double two sees Wright regain the edge.
3-3 – van Gerwen hits two 180s in the leg as he levels the contest.
4-3 – The Dutch ace adds another maximum before hitting double eight to break.
4-4 – Wright breaks back with a brilliant 121 finish on the bull, as van Gerwen sat waiting on 40.
5-4 – van Gerwen finishes double ten to break throw again.
6-4 – van Gerwen posts his fifth 180 of the game, and is given a let-off for missed doubles in three visits as Wright fails to capitalise, allowing the reigning champion back in on double two.
7-4 – Double two again comes to van Gerwen’s rescue, after Wright had missed double two for a 136 finish.
8-4 – van Gerwen lands tops for a 14-darter to win a fourth successive leg.
8-5 – van Gerwen posts his sixth 180 of the game, but is unable to take advantage of five misses from Wright at double 12, as the World Championship finalist returns to land double three and hit back.
9-5 – van Gerwen takes out 116 to regain his composure and move two legs away from retaining his title.
9-6 – The Dutchman hits a 180 to leave 70, but can only watch on as Wright takes out a superb 158 checkout on double 19 to reply.
10-6 – van Gerwen hits an eight 180 of the final, and lands double five to move a leg away from victory.
10-7 – Wright finishes 92 on double eight to keep alive his hopes.
11-7 – van Gerwen hits a 180 to leave 42, and when Wright misses a dart at double 16 the Dutch ace pins the same bed to claim the title.