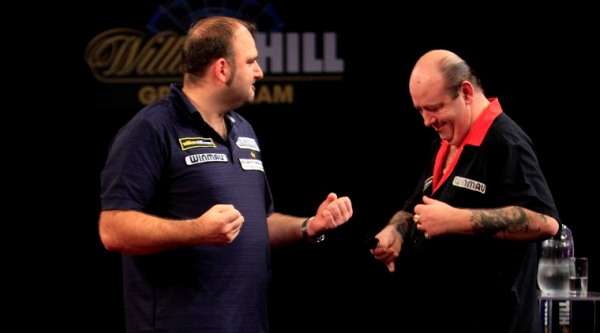 SCOTT WAITES and Robert Thornton are now through to the semi-finals with victories over Ted Hankey and Tony O’Shea at the Friday night event at the Wolverhampton Civic Hall, venue of the William Hill Grand Slam of Darts.

Waites, 2010 Grand Slam champion and The Lakeside Champion had won their Group H clash 5-3 last Saturday, and hit three ton-plus finishes as he picked up a 16-10 win in their quarter-final clash.

Hankey shared the game’s opening four legs before Waites took out 104 to move 4-2 up with a break, only for Ted to reply by hitting the bull to complete a 124 combination.

Waites extended his lead to 7-4, and though Hankey took out 90 to reply, the Lakeside Champion finished a 13-darter and a 102 finish as he moved 10-5 up, before taking out a superb 146 checkout as he moved into a 12-6 advantage.

Hankey won three of the next four to pull back to 13-9, but Waites finished tops and double one to move to the brink of victory, and though double five kept the two-time World Champion in the mate, the former Grand Slam winner followed a 180 by taking out 96 to seal victory.

Scotman, Thornton won through to the semi-finals for the first time with a comprehensive 16-6 win over Tony O’Shea, who missed 31 darts at doubles as he exited the event.

Thornton punished misses from his opponent to win the first two legs before taking out 127 for a 3-0 lead, and though O’Shea finished 123 on the bull to reply, the former UK Open champion moved 6-1 up.

O’Shea, aided by two 180s, hit back to 8-4 at one stage, but Thornton hit an 11-darter in a run of four successive legs to create a six-leg cushion over his opponent.

The Scot continued to punish the three-time Lakeside Champion for misses as he moved 15-5 up, and though O’Shea traded 180s with his opponent as he hit back on double eight, another maximum was not enough to keep the game alive as tops sealed Thornton’s win.