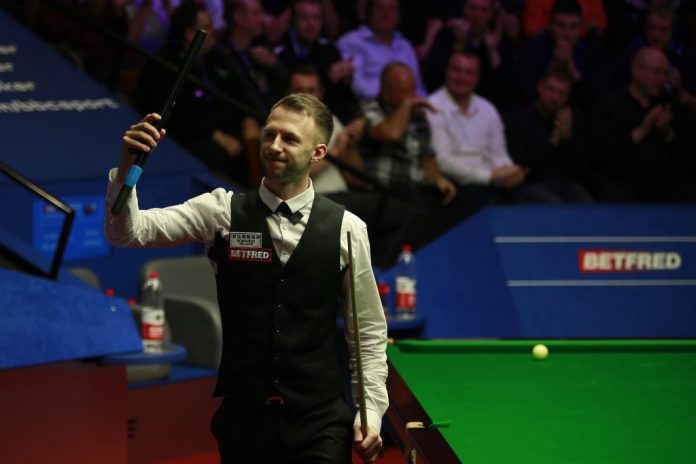 Judd Trump has opened a 12-5 lead over John Higgins after producing a dazzling performance and takes total control of the World Snooker Championship final at the Crucible.

The players were tied at 4-4 after a first session featuring four centuries and three further breaks of 50 or more.

Higgins started the second session on a good note with a ton, but a clinical Judd Trump eight straight frames win helped by two more century breaks gave him a comfortable lead.

The best-of-35 match resumes on Monday at 14:00 BST and available via World Snooker live facebook stream .

Masters champion Trump, who lost to Higgins in the 2011 Crucible final, is looking to win the world title for the first time.

Should Trump win another six frames, he would complete the Triple Crown of winning all of snooker’s top three events, having won the UK Championship in 2011, if he can clinch .

Speaking to BBC Two, six-time world champion Steve Davis said “This has been controlled annihilation of a great player”

“I’ve seen some astonishing snooker here, a lot of it from Ronnie O’Sullivan, but that was a different type of astonishing. I am a little bit in shock.

“He is making a lot of very difficult shots seem very easy. He’s not had easy breaks, they’ve been problematic, but he has pulled shot after shot out of the bag.”

Higgins, runner-up in the past two finals, is aiming to match Ronnie O’Sullivan by claiming a fifth title but the 43-year-old Scot will need to produce a stunning comeback to halt Trump.

The final session will begin at 19:00 BST, with the winner collecting the trophy and an equivalent of N235,862,500 in prize money.