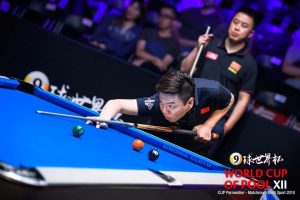 With the completion of the second round matches of 2018 World Cup of Pool (WCOP) in the Luwan Arena, Huangpu District in Shanghai; Austria, Holand, China, Philippines, Chinese Taipei, USA and Spain are the quarter finalist with the two teams of the host nation, China being successful this far.

In the second match Spain eased through ahead of Sweden while the final game saw home favourites China A put paid to the hopes of the final non-seeded country left – Australia.

The $250,000 tournament originated in 2006 and has since moved around the world before touching down in Shanghai. The World Cup features 32 pairs from across the globe including two from host nation China.

Having tripped up at the final hurdle at the York Hall last June, Shane Van Boening and Skyler Woodward are two matches away from another crack at the title following a 7-5 win over Sweden, Petri Makkonen and Mika Immonen.

In the final match, China (Wu Jiaqing and Liu Haitao) strolled to a 6-0 lead over unseeded Australia before staging a mini collapse as they missed everything possible to let the Australians back in. The Australian pair of Justin Sajich and James Delahunty took the opportunity to claw it back to 6-4 but the bridge was just too far as Wu ended proceedings with an 8/9 combo.