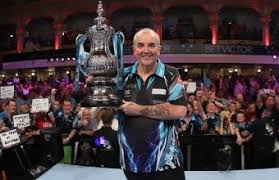 We can’t talk about darts with mentioning the Scotman, Phil Taylor for his immerse contribution towards the growth of darts as a professional sports. Neither can you name great sports personality in this era without listing his name. Phil has dominated the oche for about 2 1/2 decade and has won more trophy from darts than no other person.

The sixteen times champion has turned Blackpool as a harvest ground of trophies as he on Sunday 30th July, 2017 added the 16th World Matchplay trophy into his treasure box after defeating “snake bite” Peter Wright in the finals of this year’s event.

PHIL TAYLOR emotionally bowed out at the BetVictor World Matchplay by claiming an incredible 16th Winter Gardens triumph with an 18-8 defeat of Peter Wright in Sunday’s final in Blackpool.

The 56-year-old Stoke great has dominated the history of the World Matchplay, and said his farewell to the tournament ahead of his impending retirement in style with a brilliant display to claim the £115,000 title.

Having knocked out reigning champion Michael van Gerwen and former World Champions Raymond van Barneveld and Adrian Lewis in reaching to the final, Taylor found another huge performance to reclaim the prestigious trophy.

Taylor, who averaged 104.24 in the final, said: “It’s fantastic – this has capped everything off for me. It couldn’t have come at a better time and it’s a bonus for me.

“It’s lovely, it really is and I’ve loved every minute of it. To win a major at my age is fantastic, and I’ve had a tough week when you look at the draw.

“I’ll miss this place tremendously – I’ve loved it here since the first time I walked through the door. It’s great to win again and it will go down in history, and I’m delighted for everyone who’s supported me.”

Wright was bidding to add his second career TV title to add to March’s UK Open victory, but the number three seed was unable to match his rival’s superior finishing on the night.

Taylor secured an immediate break of throw in the opening leg on double eight and moved two legs up before Wright took out 101 to get off the mark.

Wright responded superbly with a barrage of big scores to win the next three legs in 12, 14 and 11 darts to pull back to 8-6 – but Taylor fired in two maximums in an 11-darter of his own to take leg 15.

Taylor also won the next three legs to move 12-6 up before a 13-darter from Wright saw him hit back briefly, with two further 14-darters moving the 56-year-old four legs away from the title.

After hitting a 13-dart finish, Taylor capitalised on five missed doubles from Wright on double ten to lead 16-7 and hit the same bed to move to the brink of victory.

Wright took out 95 to keep his hopes alive, but Taylor hit his seventh 180 to pull clear in the next leg before fittingly hitting double 16 to seal his 16th title.

“During the final I was watching every bit of Peter’s body language and he showed every sign of being a little bit tired,” Taylor added. “I wanted to keep putting him under pressure.

“I was miles in front at one time and he came back, but I was playing ok and I kept him under pressure.”

After being left in tears following the final, Wright said: “Phil is still the best in the world and he’s showed that this week.

“I’ve watched Phil demolish other players in finals and I was on the other end of that big stick that he normally bashes everyone with – but it was a privilege in his last game here.

“I learned a lesson today and I’m grateful to be in the final. A couple of years ago I watched Michael getting beaten by Phil in the final and he was in tears, and that’s how much it meant to him.

“It’s exactly the same for me and I’ll go back to the practice board, become better and I’ll come back stronger. I’m still learning and it was great to learn off the master there in the final.”

Following his World Matchplay triumph, Taylor has been cut from 20/1 to 10/1 to win a 17th World Championship title on his final appearance in that event over the festive period.