The Super Eagles stand the chance of winning the 1.2 million dollars prize at stake in the Africa Nation Championship (CHAN) if they beat the Atlas Lions of Morocco in front of their teeming fans on Sunday at the Stade Mohamed V, Casablanca.

Chief Coach salisu Yusuf and his crew had weathered the storm from a shambolic preparation to coming close to winning Nigeria’s first Africa Nations Championship trophy having missed out in the first two tournaments and settling for a third place in the competitions third edition hosted by South Africa in 2014.

As expected, Nigeria football officials and their counterparts in the sports ministry have turned the teams base in Morocco to a motivational speech parade.

During a visit to the team the President of the Nigeria Football Federation Mr Amaju Pinnick challenged the team to win the cup for President Muhammadu Buhari.

“On behalf of the NFF Executive Committee and the entire Nigerian Football family, I praise you for your tremendous efforts in getting this far in the face of numerous challenges. You are great ambassadors of our dear nation.

“However, the truth is that you have raised the expectations of the Government and people of Nigeria back home, and now you just have to do all that it will take to win the Cup. President Muhammadu Buhari (GCFR) has been following with keen interest your campaign here, and the only way to compensate him for his support and encouragement is to go back home with the CHAN trophy.”

The red beret wearing sports minister also seized the opportunity of the occasion to launder his image and that of the government of President Buhari.

“I want to also thank Nigerians for their support and encouragement, standing by the team and most especially the Nigeria Football Federation for ensuring a rancour free tournament for the team throughout their stay in Morocco”

“Nigerians are very happy with you and today, we have hope that the future of our football is bright. Our President is a sports-loving President and he is following everything that is going on here. I can tell you honestly that he is waiting eagerly to receive you after  you have won the trophy, so be ready to fight for your country on the pitch and make your people happy.”

Going into Sunday’s Final, former Nigeria international Yusuf is tested further with injury to goalkeeper and captain Ikechukwu Ezenwa in the semi final ruling him out of the big clash, and 45,000 home fans cheering on the Atlas Lions.

In their only previous CHAN encounter, Nigeria came from three goals down to defeat Morocco 4-3 after extra time in the quarter finals in Cape Town four years ago. 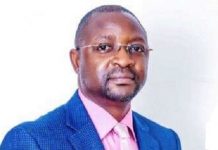 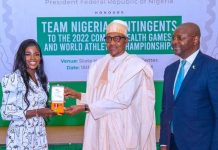 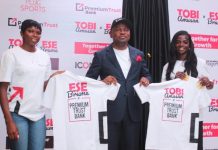