Super Eagles manager Gernot Rohr has dropped four players from the thirty that made the provisional list for the FIFA World Cup which starts in fifteen days time.

Nigeria Professional League top scorer Junior Lokosa ,Plateau United Shot stopper Dele Ajiboye, Defender Stephen Eze, and Uche Agbo  are the players that will not be travelling with team to London where the Super Eagles will play against the 3 Lions of England in a tune up game on Saturday.

Another  player whose fate will be known by Friday is  Moses Simon who is believed to be nursing an injury.

Lokosa started the friendly game against the Leopard of DR Congo on Monday but it appears  he is not in the managers plan for the soccer showpiece .

One of the players dropped Stephen Eze of PFC Lokomotiv Plovdiv took to his twitter account to express his disappointment of not making it to the tournament .

Sadly, my journey to #WorldCup ends here. I am disappointed to not make the final squad, but I want to thank our coach & management for the opportunity!

I wish my team the best & hope to join in celebrations when they bring the trophy home! GO #NIGERIA 🇳🇬⚽! #DefendLikeEze” 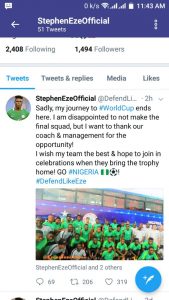