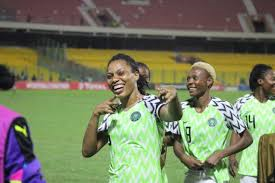 The Super Falcons, Nigeria Women’s national team has qualified for the second round of the ongoing 2019 FIFA Women’s World Cup holding in France.

Despite losing to France and Norway but winning their match against South Korea and ending with 3 points in the preliminary round, the Super Falcons moves into the second round as the fourth team of the best third placed team at the expense of Chile who needed a three goal margin in their match against Thailand which ended 2 – 0.

The Super Falcons is to meet the German Female national team in their next match which is the R16 beginning the knock out stage of the Women’s World Cup.

Needing a three-goal win to advance, Chile were 2-0 up when they were awarded a penalty after keeper Waraporn Boonsing fouled Maria Jose Urrutia.

However, Francisca Lara stepped up and struck her effort against the bar.

They took the lead when Boonsing inadvertently fired into her own net before Urrutia’s header made it 2-0.

At full time there were tears among the Chile players who made history with their first goals in the competition, but ultimately fell short against a side who had conceded a total of 18 goals in their previous two Group F games.

It was celebration, tears and whipping in the Super Falcon’s hotel as the hope of moving further in the event was actualized after the painful 1 -0 loss to host country France in the last match of the preliminary when a controversial decision by center referee who awarded a penalty retake because of the purported new FIFA rule.

The new rule (at penalties) is that the goalkeeper must have at least one foot on the line, whatever the histrionics.

After the painful 1-0 loss to France, Nigeria’s head coach, Thomas Dennerby almost railed against the referees and the VAR team.

“I am disappointed with the result. France is a really good team and does not need support from anybody to win games.